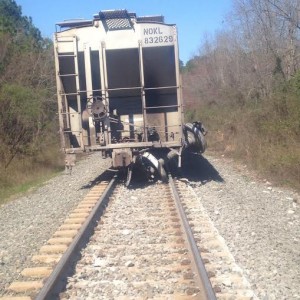 In South Crisp County just off South Dorough Rd. A series of rail cars containing potential hazardous material came off the tracks. Agencies responding include; the Crisp County Sheriff’s Office, Crisp Fire and Rescue and Crisp EMS. Apparently the Sheriff’s Office has determined that spillage has not occurred. The potential is present however, so Sheriff Hancock instigated an Incident Command Structure, which at this point is to confine and contain the incident. CSX personnel are on scene with equipment to fix the problem. Stay tuned for further details as they become available.