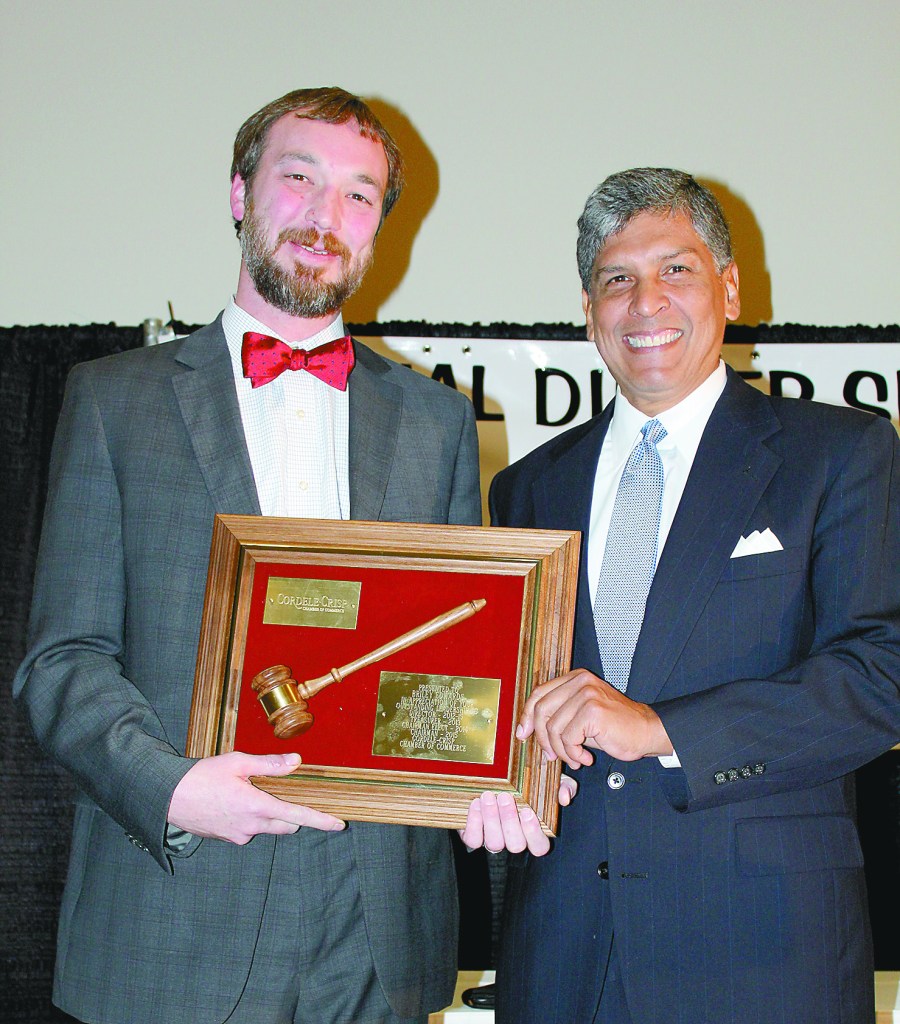 CORDELE — There was a full house at the Cordele-Crisp Chamber of Commerce Annual Dinner and Meeting held Thursday night at the Retreat at Lake Blackshear.
Briley Edwards, 2015 board chairman called the meeting to order. An invocation followed led by Rev. Cheryl Goliday. 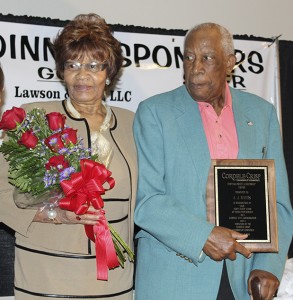 Becky Crissman/Cordele Dispatch
Retired City Commissioner A.J. Rivers was presented the Lifetime Achievement Award by the Chamber. His wife Vera, was presented with a bouquet of roses for her support of him throughout his service to the community.

The National Anthem was performed by Daina Rosario, of the Georgia Southwestern State University Jazz Ensemble. The full ensemble provided entertainment for the evening. They are under the direction of Dr. Mark Laughlin, who is the Assistant Professor of Music at GSU. Dr. Laughlin teaches applied piano, group piano, music theory, aural skills, and music history. In addition to being director of the Jazz Ensemble he is the coordinator of the community music program. The ensemble performed throughout dinner.
Following the dinner the first item on the meeting agenda was the honoring of retiring directors; William Edwards, CJ Griffin, Richard Grogg, Bridget Milani, Bill Hulett, Anil Maniklal, Brad Westenfeld, and Jeff Whelchel.
Executive Committee member Patti Deal then introduced the recipient of the award for Exceedingly Excellent Teacher. The honor went to retired educator Sara Alford who taught in the Crisp County School System for over 29 years. Ambassador of the year was awarded to Trisha Bush and Laura Garland received the honor for Volunteer of the Year.
A special honor was awarded to retired city commissioner A.J. Rivers. He was presented with the Lifetime Achievement Award from the chamber. His wife Vera, whom Rivers often refers to as his boss, was asked to join him onstage. She was presented with a bouquet of roses to honor her for supporting her husband as he served over four decades on the city commission, working diligently for the people of Cordele. Rivers was the first African-American to be elected to serve in city-wide office in Cordele. In addition to his time on the board he served on numerous boards and committees including the chamber.
Rivers said he was honored to receive such recognition.
Manufacturer of the Year was presented to Norbord.  Small, Medium, and Large Business of the Year went to Southwest Georgia Rehab, Striplings, and Helena Chemical respectively.
Exiting Chairman Briley Edwards thanked the chamber, the staff and the community for making his year as chairman a success. Following he remarks he passed the gavel on to 2016 Chairman Ron Cruz who presented the 2016 Officers and Directors. Cruz said he was looking forward to the coming year. The meeting was adjourned