One shot in Dooly County. 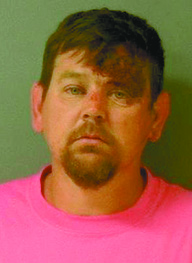 DOOLY — One man was injured and one arrested following a shooting incident at a campground here over the weekend.  According to reports from the Dooly County Sheriff’s Department, at approximately 12:30 a.m. on Sunday morning deputies responded to a call about a shooting at Campers Haven. Upon arrival at the scene deputies made contact with the victim, 33-year old Thomas Williams Clements, a white male from Vienna, Ga. Witnesses there were able to subdue the offender, 38- year old John Steven Avery, a white male from Americus Ga. Witnesses stated the incident started in the restaurant area of the Campers Haven store and management was able to subdue both subjects and remove them from the area.  They were in the parking lot and the altercation began again and during that time Clements was shot in the buttocks and leg by Avery. Clements was transported by Dooly County EMS to Crisp Regional Hospital for treatment care for his non-life threatening wounds and was later released.   Mr. Avery was arrested on scene and is being held at the Dooly Justice Center and is being charged with one count of Aggravated Assault, one count Possession of a firearm during the commission of a Felony.