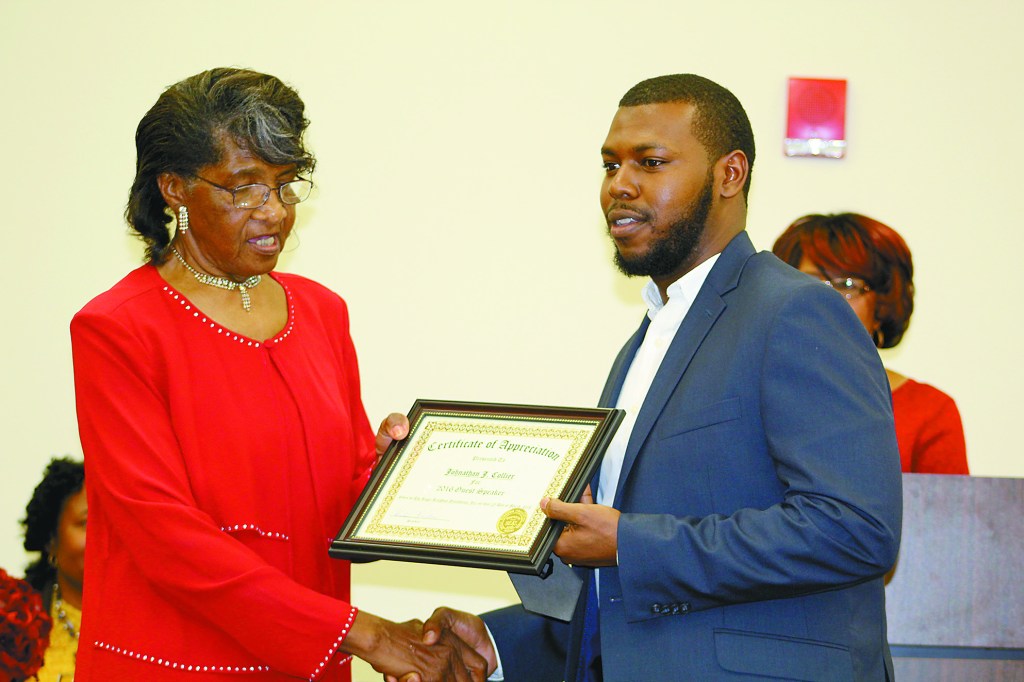 CORDELE — The Roger Kingdom Foundation Inc hosted their 13th Annual Awards Banquet on Saturday, March 12 at the Unadilla Community Center.
Mistress of Ceremony Mrs. Christine Kingdom, president of the foundation opened the program.
Kingdom established the foundation in honor of her son, Roger Kingdom, a Dooly County native, and two-time Olympic Gold Medalist. The purpose of the foundation is to work with middle grade youth to help them realize their full potential. To date the foundation has given more than $12,500 in scholarships to graduating seniors in Dooly County.
One recipient of the 2007 scholarship returned as guest speaker for the evening. Johnathon Collier graduated from DCHS with honors the year he received the scholarship. He then went on to Valdosta State University, obtaining a B.S. in Biology. He is currently a sales rep for the Valdosta Verizon Wireless.
“I want to thank the foundation for what they continue to do for young people,” said Collier. “There are a lot of problems that this generation faces. This generation needs a connection with older generations. We need your knowledge.”
Collier said he hopes to give back someday and shared his hope that the foundation will continue to grow and help generations to come. He ended by quoting from Proverbs 23:12 “Apply your heart to instruction and your ears to words of knowledge.”
Collier was introduced by Deonna Johnson the 2008 recipient of the foundation’s scholarship. Johnson attended South Georgia College where she earned her Associates of Arts Degree in Psychology.
After honoring the Johnson and Collier, Kingdom presented several other awards to those who have served the foundation through the years. The first of those was to Lovie Bagley, whose catering service has prepared the meal for the foundation’s banquet for the past several years. Kingdom then presented the 2016 Business of the Year Award to Alvie Coes Funeral Home who has continually supported the foundation. Volunteer of the Year was awarded to Donella McIntee and Director of the Year was awarded to Lorrye Borden.
Kingdom recognized special guests including Vienna Mayor Hobby Stripling Sr. who was serving as mayor at the time of Roger’s Gold Medal achievements.