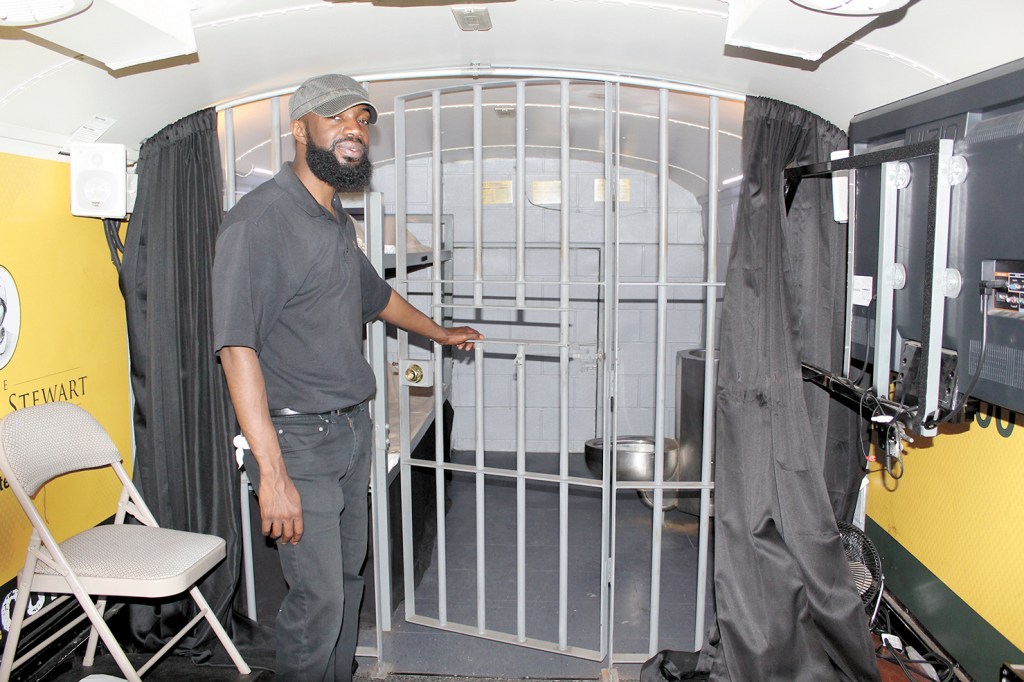 Becky Crissman/ Cordele Dispatch Anthony Williams shows the prison cell on the back of the Choice bus. It is to give young people an idea of what life is like behind bars.

CORDELE — Crisp County Middle School students got a unique opportunity to see first hand the importance of education – at least $1 million over a person’s lifetime if they graduate from college and the type of devastation that can be caused by not making good choices. 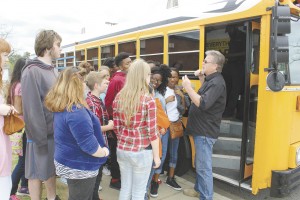 Becky Crissman/Cordele Dispatch
Robert Walker welcomes a group of kids to the choice bus and goes over the rules for the program.

State Farm Insurance in conjunction with The Mattie C. Stewart Foundation brought the Choice Bus to the Crisp County Middle School this week, with nearly 500 students boarding the bus on Wednesday and Thursday. The Choice Bus is a half-prison cell, half-classroom converted school bus, which visually portrays two different life perspectives
Since 2008, The Choice Bus has impacted the lives of more than 2,000,000 students in 21 states. The bus is one of six tools created by The Mattie C. Stewart Foundation devoted to continuing the process of reducing the dropout rate in the United States.
About State Farm:
State Farm and its affiliates are the largest provider of car insurance in the U.S. In addition to providing auto insurance quotes, their 18,000 agents and more than 65,000 employees serve over 82 million policies and accounts – nearly 80 million auto, home, life, health and commercial policies, and nearly 2 million bank accounts. Commercial auto insurance, along with coverage for renters, business owners, boats and motorcycles, is available.
State Farm Mutual Automobile Insurance Company is the parent of the State Farm family of companies. State Farm is ranked No. 41 on the 2014 Fortune 500 list of largest companies. For more information, please visit http://www.statefarm.com.
About The Mattie C. Stewart Foundation
The Mattie C. Stewart Foundation is a national nonprofit organization dedicated to reducing the dropout rate. The foundation was established in honor of Dr. Shelley Stewart’s late mother, Mattie C. Stewart, in the summer of 2007 and is headquartered in
Birmingham, Alabama. Its primary corporate partner is o2ideas, Inc., an advertising and public relations company also based in