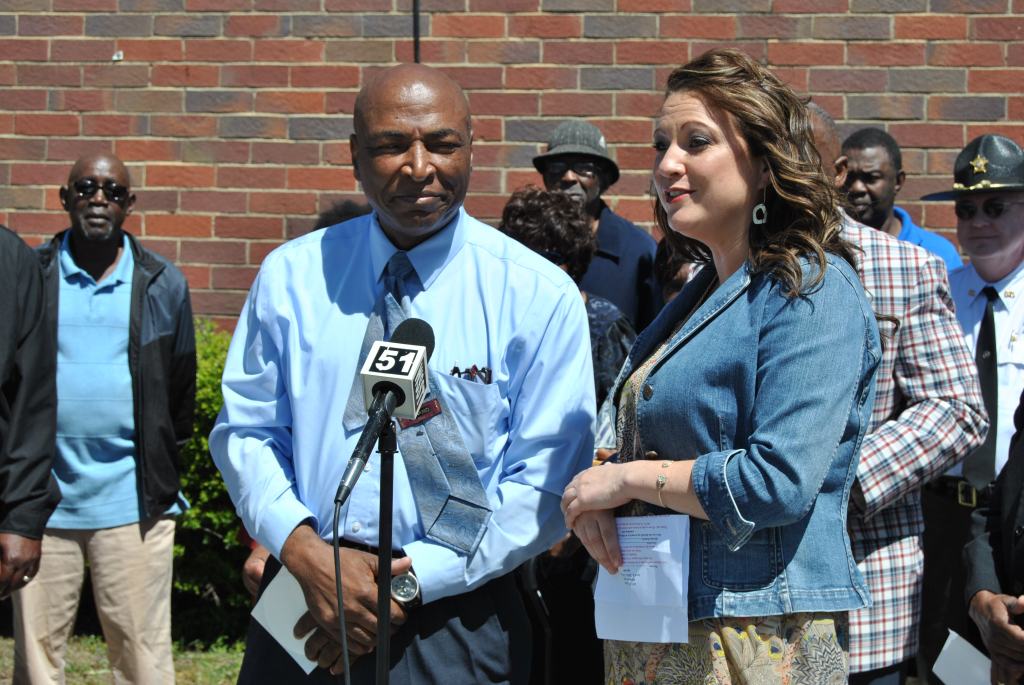 CORDELE — One of the city’s most historical buildings has been given a new purpose with the opening of the A.S. Clark Clinic.
According to clinic president Mathew Whitest M.D. the facility will officially open on Wednesday, April 13 at 9 a.m. 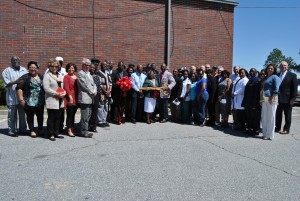 Becky Crissman/Cordele Dispatch
There was a big turnout to congratulate Mathew Whitest M.D. on the opening of the new A.S. Clark Clinic. A ribbon was held outside the facility on Friday. City, County and State leaders attended the event as well. The clinic will be officially open at 9 a.m. on Wednesday, April 13.

An official ribbon cutting was held Friday, April 9 at the facility.
Amber Herrington, vice chair of the Cordele-Crisp Chamber of Commerce welcomed guests to the ceremony and Elder J.C. Clark provided an invocation. City Commissioner Vesta Beal Shephard appeared on behalf of that board.
“Welcome to community,” she said. “Thank you for joining this city, a city of progress.”
County Commission Chairman Clark Henderson said it was a pleasure to have the opportunity to welcome the new clinic to the city.
“I remember when this area used to be a farm and I picked cotton right here. My children and grandchildren went to school here. This will be a huge benefit to the community. This building has a lot of history and it is great to see it re-purposed.”
Henderson congratulated Whitest, whom he called his friend, on the opening of the clinic and wished he and his staff the best of luck.
Crisp County Industrial Development Authority Director Grant Buckley was also on hand to congratulate Whitest on the new facility.
“On behalf of the Industrial Development Authority and the Industrial Development Council I would like to congratulate you and wish you the most success. It is a happy moment when vacant facilities in the area can be put to productive use.”
Representative Buddy Harden said that rural healthcare has struggled and that some new bills will be coming into effect that could bring as much as $100 million to rural healthcare when signed.
“This is a great step for this community,” he said. “We are also looking at school-based clinics.”
Senator Greg Kirk said he had previously spoken with Whitest about healthcare issues.
“I am looking forward to what this clinic will be able to provide for this community.”
“I am overwhelmed by the outpouring of support we have received,” said Whitest. “Thank you all for taking the time to come out and show your support. This facility has been closed since 2014 after 58 years of service to education.”
Whitest commended the Crisp County School System on the good job they had done maintaining the facility since its closure.
“The building is still in good shape,” he said. “There is no sense in just letting it decline.” He commented how the former Gillespie-Selden provided healthcare on the west side of town and that the new clinic would do the same.
“In this area we have a hight rate of high blood pressure and diabetes,” he said. “We have to do better. It is gonna take all hands to the plow. We need our faith-based organizations, our pastors to help educate their members. We need to check on each other. We love our good southern food, with fat and salt, that’s what makes it taste good. However, too much of that is not too good.”
Whitest said the first order of business is to get the clinic up and running. He said they will begin with well checks on Monday, Wednesday, and Friday and as the patient number grows they will move to five days a week.
“We will be working closely with the hospital,” said Whitest. “We cannot attract industry to this community without a thriving hospital.”
Whitest said this summer the facility will be hosting a Summer School for about 200 students in the area which will be held on June 13 – July 29. He said they also want to implement a GED program.
“I was talking with Sheriff Hancock and he said that of those incarcerated approximately 62% have no high school diploma or GED. What chance do they have.”
He said the gym and auditorium will also still be available to the public. He said the school would continue to serve the community and that there would be a need for assistance from the community. Whitest said he was also working on a biomedical program.
“We need to be stronger in biomedical research,” he said. “I am working to bring research here which will bring in a new set of industries and jobs. We are a family in Cordele/Crisp County. What hurts one part hurts all. What helps one part helps all.”