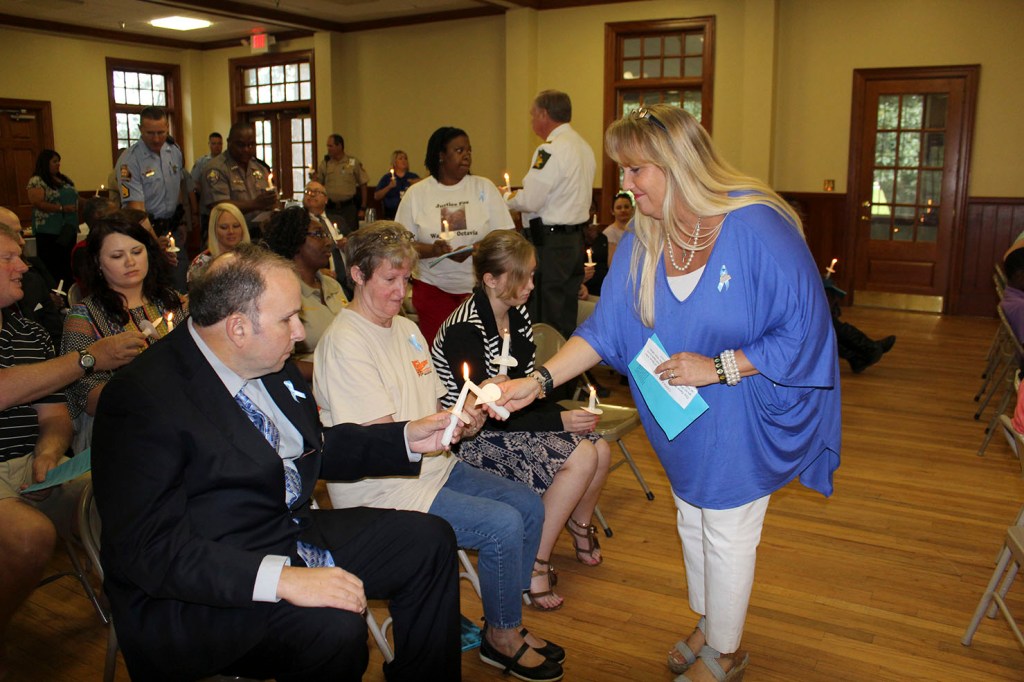 CORDELE — In honor of National Crime Victims Rights Week 2016, a Candlelight Vigil Ceremony as held Wednesday at the Cordele Community Clubhouse.
Celanese Floyd VWAP Coordinator for the District Attorney’s Office in Fitzgerald welcomed those who attended the vigil which was followed by an invocation provided by Major John Wiggins of the Crisp County Sheriff’s Office. Wiggins prayed for those who had suffered loss and asked God to give victims assurance that He stands with them in the hope that they will find God in their time of sorrow. Jamel Mejia, VWAP Early Outreach Advocate for the DA’s Office of Cordele introduced Interim District Attorney Brad Rigby as the guest speaker for the evening.
Rigby said it was a Sunday just like any other the day that Ashley Garry did not show up for her shift at the Cracker Barrel. A concerned employee went to go check on her. She was found shot to death in her home.
“A mother, daughter, sister, co-worker and friend,” said Rigby. “She became a victim of crime that day. Others also became victims, her son, her parents, grandparents, friends and co-workers, because a violent crime that changed their lives.”
Rigby spoke of young Tellis Fort, who called his sister as he left the gym one night. Not knowing that when he arrived home he would surprise two burglars who would end his life. Fort was shot to death just 10 feet from his front door.
“I will not tell you the names of those that committed these acts of violence,” said Rigby. “They deserve no notoriety.”
He spoke of a Fitzgerald couple shot and killed in their own home and a local businessman, beaten with his own prosthetic leg, now in a nursing home. He spoke of young Jasperion Armstrong who last year fell victim to senseless gang violence.
“We are here tonight to honor those victims, to honor their families, said Rigby. “This year’s theme is Serving Victims, Building Trust and Restoring Hope and that is what we are working to do.”
Rigby said many of those perpetrators are now serving life sentences and that he knows it does not bring back loved ones lost but he hopes it gives them some peace.
“Galatians 5:13 reads For, brethren, ye have been called unto liberty; only use not liberty for an occasion to the flesh, but by love serve one another. Psalm 32:10 tells us that Many sorrows shall be to the wicked: but he that trusteth in the Lord, mercy shall compass him about.”
He said that as for victims and families he prays they find hope.
“Psalm 121 verses 1 and 2 read I lift up my eyes to the mountains where does my help come from?
My help comes from the Lord, the Maker of heaven and earth… As your DA I will strive to do right and bring justice and make tough decisions to give a voice to those who no longer have one.”
Following his address to the crowd Rigby presented Crisp County Sheriff Investigator Carla Stowe with the Officer of the Year Award as recognition for her efforts put forth during the Ashley Garry murder investigation.
Lighting of the candles then began with Lelee Phinney lighting the Candle of Love, Crisp County Sheriff Billy Hancock lighting the Candle of Courage, Vienna Police Chief Cozie Ray lit the Candle of Hope, Chandrika Price lit the Memory Candle and SFC Jon Posey with Georgia State Patrol Post 30 lit the Candle for Slain Officers.
Afterwards each person in turn shared their flame for another to light a candle as Jessica Wilson performed “To make you feel my love”
Special recognition of families present was given by Belinda Griffin VWAP Advocate for the Cordele District Attorney’s Office and a closing prayer was given by Charles Sheppard and Investigator with the Fitzgerald DA’s Office.