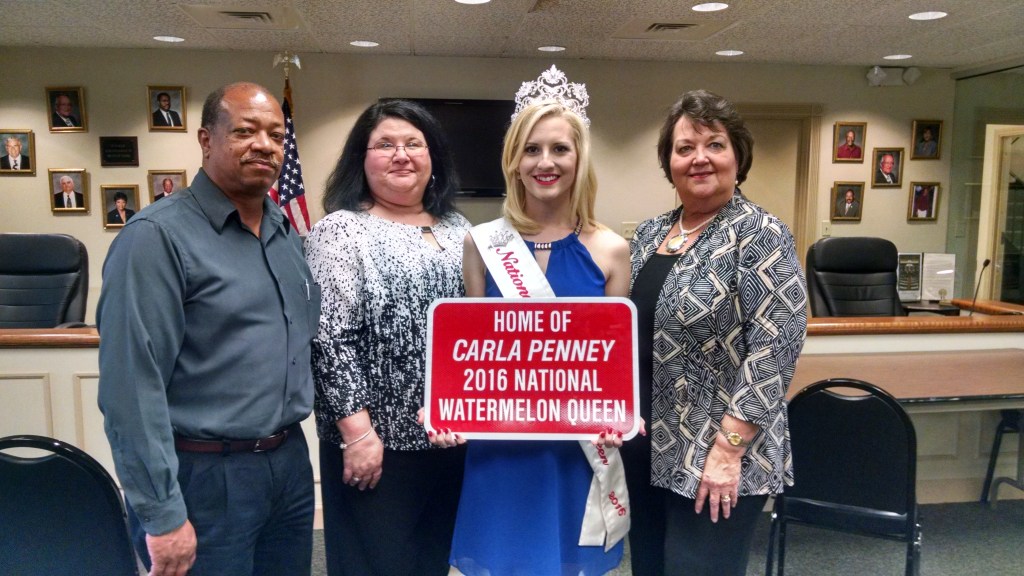 VIENNA — The City of Vienna held a reception Monday night to honor their native daughter, Carla Penney, who was recently crowned the 2016 National Watermelon Queen.
Penney, age 24, is the daughter of John and Carlene Penney. Born and raised in Vienna, she is a senior at the University of Georgia where she will earn her BA in History with a minor in Communications Studies.
Mayor Hobby Stripling, Sr. read and presented a proclamation to Penney declaring April 18 as Carla Penney Day in the City of Vienna.
The city also unveiled a sign that will be erected at the city limits proclaiming Vienna as “Home of Carla Penney 2016 National Watermelon Queen.”
“This is very humbling,” said Penney. “Vienna is home to me and it is very special for the city to remember me during such a special time. It really puts me at a loss for words.”
Penney was crowned at the National Pageant held on February 27 in New Orleans, Louisiana.
Penney, a former Georgia Watermelon Queen, said being crowned held a sentimental value for her.
“Growing up in an Ag community, it is important to me to have the opportunity to act as a goodwill ambassador for that,” she said. “As a child I remember going to the Farmer’s Market in Cordele and seeing all the watermelons. I would always get to pick my own melon.”
During her reign, Penney will be working with the National Watermelon Association to promote U.S. watermelons, traveling all over the U.S. and Canada. Penney recently returned from a trip to Calgary, Canada where she attended a Canadian Produce Show talking about watermelons.
“They received the queens very well there,” she said. “They love U.S. watermelons.”
Mother’s Day weekend she will be in Minneapolis, Minnesota where she will be handing out melons at the Race for the Cure for Breast Cancer.
“I am really excited to represent the City of Vienna, the State of Georgia and the Nation,” she said. “It is time that Ag, and watermelons especially, had a voice, someone to speak for them. I am going to do the best I can to spread the good news of watermelons.”
Penney said she wants to thank everyone for the support.
“I also want to thank all the watermelon growers and wish them a successful and prosperous season,” she said.