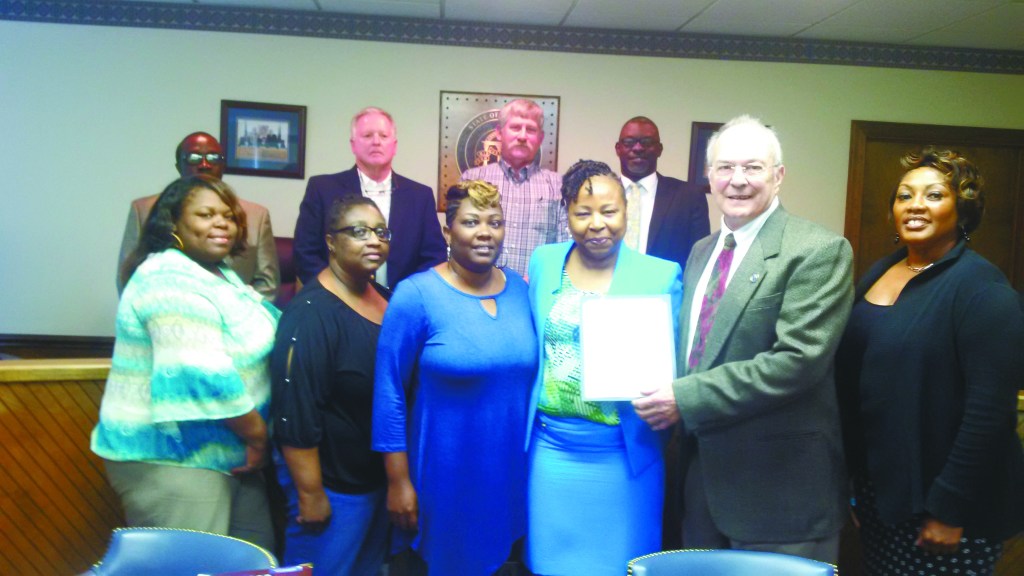 Submitted by Sherrie Leverett Crisp Commissioners presented the Department of Family and Children Services with a proclamation in observance of Child Abuse Prevention Month.

CORDELE — During their regular meeting last Tuesday, County Commissioners issued proclamations honoring special observances in April.
The first of those proclamations was to proclaim April 10-16 as National Crime Victims Week in Crisp County. Belinda Griffin, Victim’s Advocate for the Crisp County Office of the District Attorney, was present to receive the proclamation. She introduced the newest member, Jamel Meja, who serves as the office’s Early Outreach Advocate who was also present. Commission Chairman Clark Henderson read and presented the proclamation to Griffin and Meja. The second of the proclamations was designating the month of April as Child Abuse Prevention Month in Crisp County. Linda Rollins, Interim Director of the Crisp County Department of Family and Children Services, and some of the staff there were present for the reading and presentation of the proclamation by Henderson.
Rollins also submitted an annual report for the DFACS office to the board. She said although they are currently short staffed, they are expecting new case managers.
Rollins informed the board that the county continues to see a lot of poverty, with $10 million spent on food stamps and another $2 million for assistance to needy families. Rollins advised the board that in 2015 there were 58 children in foster care and currently that number has reached almost 80, with two pending that very afternoon. She gave commissioners an update on the foster situation in the area.
Commissioners also approved a GOT Grant Contract for the crack seal and remarking of the airport. The total cost of the project will be $335,116 with the county portion being $39,272.50 which would be paid out of Special Local Option Sales Tax (SPLOTS).
Also on the agenda;
• Commissioners appointed Linda Finch as Crisp County Clerk.
• Commissioners also discussed some plans to make improvements at Loron Williams Park.