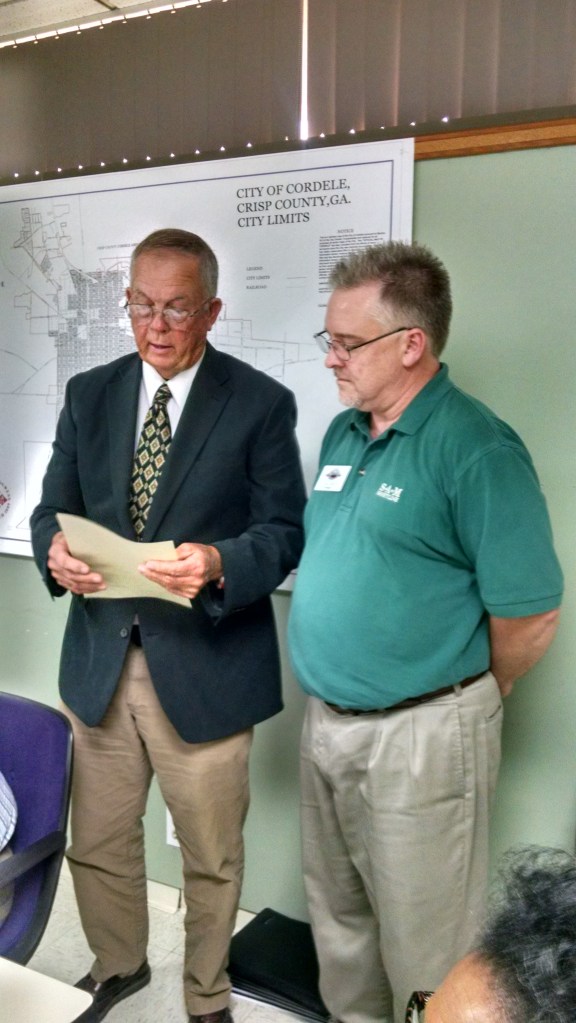 CORDELE — City Commissioners here held their regular bi-monthly meeting Tuesday night during which they approved several items of business on the agenda.
Commission Chairman Zack Wade read and presented a proclamation designating Saturday, May 7 National Train Day in Cordele. Sam Shortline Manager Terry Miller accepted the proclamation and announced their annual Touch a Train event which will be held at the Sam Shortline Depot at Georgia Veterans Memorial State Park on that day.
Wade asked City Administrator Edward Beach to comment on the water outage issue that affected the city the previous week. Beach informed the board that an out of town contractor cut off a valve which caused three water mains to break. Beach further advised that all water testing came back good and there was nothing wrong with the water quality following the incident. The EPD required a Boil Water Order for those affected by the outage.
During his report to the commissioners, Beach presented several action items for approval. The first of those items was an application for a Beer and Wine Consumed Off Premises Application for Diya 902,LLC Bait and Grocery, located at 902 West 16th Avenue. The applicant’s name is Devang J. Patel. A motion was made and second and the vote was 3-1 with Commissioner Jeanie Bartee being the only opposition.
The second application was for a Beer Only to be Consumed on Premises. The application was for El Girasol, located at 102 14th Avenue East. The applicant is Yolanda Medina. Again the vote was approved 3-1 with Bartee being the only to oppose the motion.
An application for Distilled Spirits by the Drink was submitted by Last Call Sports Bar and Grill, located at 3002 Frontage Road Suite H. The applicants name is James Michael Young. The board also approved this with a 3-1 vote with Bartee opposing the motion.
The board also approved a request for the Closure of 3rd Street, between 2nd and 3rd Avenue from 4 p.m. on Friday, June 25 until 5 p.m. on Saturday, June 26.
Also approved was a professional and technical services agreement with River Valley Regional Commission as part of the ongoing RSVP plan for downtown Cordele.
The City of Cordele also received confirmation that the Multi-Jurisdictional Hazard Mitigation Plan has been federally approved and will be in effect through February 22, 2021.
The City Commissioners will meet again on Tuesday, May 3, 2016