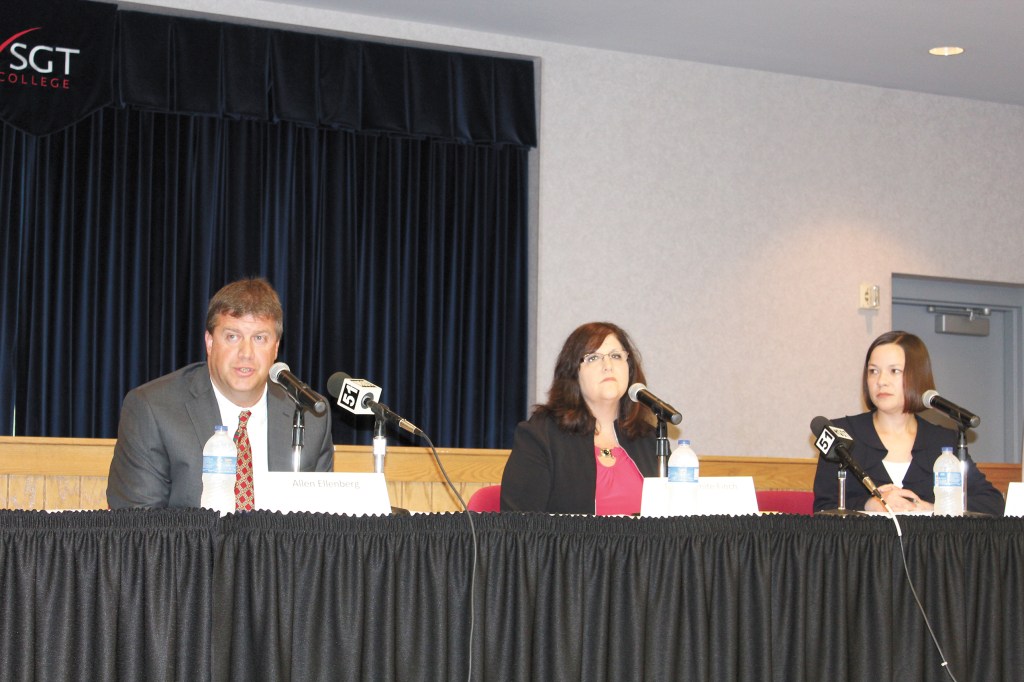 CORDELE — Candidates for the Republican Primary vying for three elected positions in Crisp County met face-to-face during a forum Tuesday evening.
The event was hosted by the Cordele-Crisp Chamber of Commerce and held at South Georgia Technical College. Those participating in the forum were;
• Crisp County Probate Judge: Allen Ellenberg, Teena Finch, and Amber Roberts Holloway.
• Crisp County Tax Commissioner: Parker Lee “Scrap” Cook and Deborah Lofton.
• Crisp County Commission District 2 Post 3: James R. “Dickie” Dowdy and incumbent Clark Henderson.
Chamber Chairman Ron Cruz welcomed members of the public to the forum and introduced Carden Summers as the moderator for the event.
In the race for Tax Commissioner, candidate Deborah Lofton said she wanted to continue to serve the citizens of Crisp County. Lofton has worked in the Tax Commissioner’s office for the past 18 years. Opponent Parker Lee “Scrap” Cook said he has training and experience that qualifies him to operate the office.
Neither candidate foreseen any immediate changes they would make to the office if elected. Both promised to treat all citizens fairly in matters stemming from the tax office.
Vying for the Republican race for Crisp County Probate Judge Allen Ellenberg, Teena Finch, and Amber Roberts Holloway. Finch has 35 years of experience in the office, having worked under Belinda Griffin and Rusty Wright. She has served as Chief Clerk for the past 17 years.
Ellenberg has been a resident of Crisp County for 14 years and has experience with the Council of Juvenile Court Judges. He also holds a degree in psychology.
Born and raised in Crisp County, Holloway comes from a long line of attorneys having practiced with her grandfather, Velpoe Roberts. She holds an advanced law degree and believes her education and experience make her suited to be the next Crisp County Probate Judge.
All three candidates agreed the function of the probate judge is very important. Each vowed to treat the citizens fairly in matters of the probate court. Finch said the office is very mindful of spending money and are always looking for ways to increase revenue. Holloway said if elected she will cross train the staff and accept input from citizens and Ellenberg said he will do his best to operate fairly for all of Crisp County citizens and work to uphold the letter of the law.
In the race for County Commission District 2 Post 3 both candidates, Dowdy and Henderson said they would work to bring more jobs to the Crisp County.
Dowdy says that he hopes to use his sales skills to promote Crisp County and ultimately work to make it a better place to live, work and raise a family.
Henderson, who is seeking re-election said that, jobs are very important and he wants to continue to work to bring more to Crisp County. Both candidates said they would consider the matter of consolidation if they felt it was something the people would want and would not have a problem with the matter being on a ballot.
Early voting continues and the primary will be held on May 24.