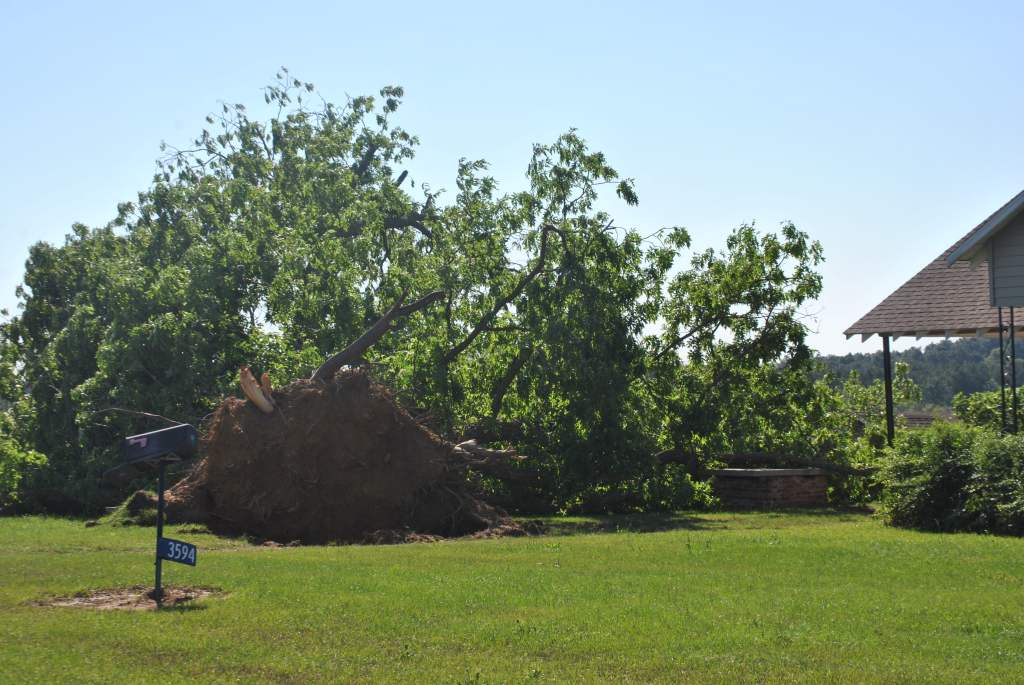 Joe Joe Wright/Cordele Dispatch This photo, taken Wednesday morning, shows a tree uprooted by the storm that blew through Crisp County on Tuesday night. First responders and workers with the Crisp County Power Commission worked to restore order all night.

CORDELE — A patch of rough weather blew through Crisp County Tuesday night causing significant damage in some areas and leaving some residents without power.
According to Sheriff Billy Hancock the storm hit at around 7:30 p.m. Hancock, who is also EMA Director, said he received a call from the National Weather Service stating that winds were getting up to between 60-70 mph.
“The storm traveled northeast across the county,” Hancock said. “There were reports of dime-sized hail and we estimate that winds got up to 30-60 mph.”
Two homes in the area were damaged by fallen trees and there were some metal carports reported overturned. One vehicle ran under a tree that had fallen into a roadway. Several areas in the county lost power.
“We called out additional personnel to assist,” said Hancock. “We also helped provide safety for workers from the Crisp County Power Commission as they worked diligently to get the power restored. Both the Power Commission and the Public Works Department are to be commended for their hard work to restore power and clear roads of debris.”
Hancock said one roadway remained blocked until 4 a.m. on Wednesday morning.
General Manager for the Crisp County Power Commission, Steve Rentfrow said the majority of their line crew were out working, except one or two who were out of town.
“The storm was brief but very intense,” said Rentfrow. “There were some very high, straight-line winds. There were five trees down on lines in different areas.”
Rentfrow said there was also trees down and damage around the southeast part of the city and southern area of the lake.
“Our employees worked pretty much all night to make sure that power was restored to every citizen in the county.”