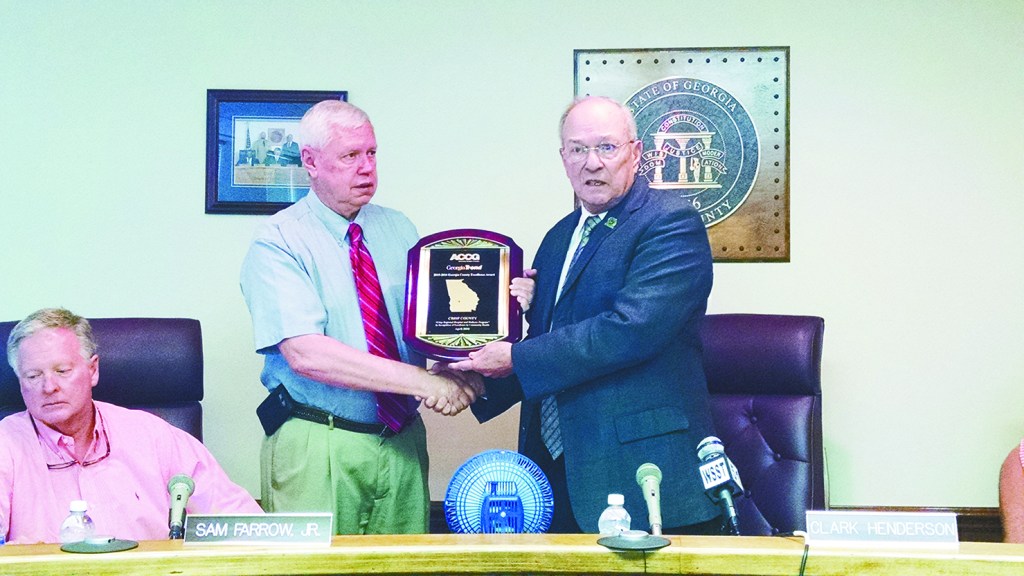 Becky Crissman/ Cordele Dispatch Criisp County Commission Chairman Clark Henderson presents a plaque the county was awarded by the ACCG for being named a County of Excellence. Crisp was 1 of 5 counties to receive the honor.

CORDELE — During their regular meeting Tuesday, Commission Chairman Clark Henderson announced Crisp County received a County of Excellence Award. Henderson presented the plaque to County Administrator Tom Patton to put on display. Crisp County was 1 of 5 selected out of 159 counties to receive the honor. It was awarded at the Spring Conference for County Commissioners in Savannah. The award was bestowed on the county and the hospital. 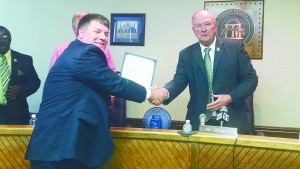 Henderson also read a proclamation proclaiming National Travel Tourism Week 205-2016, which was the week of May 1 through May 7. Eli Tinsley of the Cordele-Crisp Chamber of Commerce was presented a copy of the proclamation by Henderson.
Sherry Evans updated the board on Family Connections, which is a state non-profit organization with coordinators in each county. The group addresses issues that impact families and children. Their main purpose is partner engagement. Evans said they want to strengthen partners. The year will end on June 30 and they want to celebrate the successes of the organization. Evans thanked the commissioners for their continued support of Family Connections and informed them their meetings are the 4th Thursday of every month at the Dowdy Building. The meetings are opened to the public.
Henderson told Evans that during his time on the board for Family Connections he was very impressed
“You offer a lot of essential services to the public,” he said. “It has had a big impact on the community. We appreciate the job you do.”
Henderson commented specifically on the work the organization does for the elderly in the community.
“When you are old and sitting at home just looking at four walls it is nice to have someone to come and get you and take you somewhere,” he said.
Commissioners were presented with a Utilities Agreement for execution in regards to the expansion of the Hwy 280 Bridge. A waterline is attached to the bridge and the cost to move will be covered under the Transportation Investment Act at over $100,000. A total of $180,784.72 has been approved for the project. The board approved Chairman Henderson to sign necessary paperwork. Patton informed commissioners that additional LMIG money has become available and that an application for additional funding for the county has been submitted. A request for paving the shoulder on Drayton Road has been submitted but it is uncertain whether or not it will be accepted. The CDBG 2014 is between 70-75% complete.
Commissioners commented on the recent storm in Crisp County. Henderson stated there were trees on power lines, cars and houses. Commissioner Wallace Mathis said citizens should be reminded to exercise caution during storms.
“We want our citizens to be safe above all,” he said. “Stay home and do not be out riding around.”
Mathis also commented on what a good job the Power Commission and Public Works Department did during the storm in handling problems and restoring power.
Patton read a written report submitted by Sheriff Billy Hancock of the Crisp County Sheriff’s Office. Major John Wiggins, was present at the meeting and commissioners informed him how much they appreciate the job performance of the sheriff and the entire department. Wiggins thanked commissioners for their continued support.
Finance Director Sherrie Leverett made the formal presentation of the county’s FY2017 Preliminary Budget. She advised they were still working to get the budget balanced and are still working on the General Fund.
Grant Buckley, Director of the Industrial Development Authority gave a report to the board. He informed commissioners they were currently working on 3-4 pretty serious prospects but that none were across the finish line yet. According to Buckley’s report the unemployment rate for the county is down to 6.1%. It was at 8.5% just a year and a half ago. He said right now we are seeing good, steady internal growth.
Henderson commented on how fortunate the county is to have Buckley and that he has done a phenomenal job since he has been here.