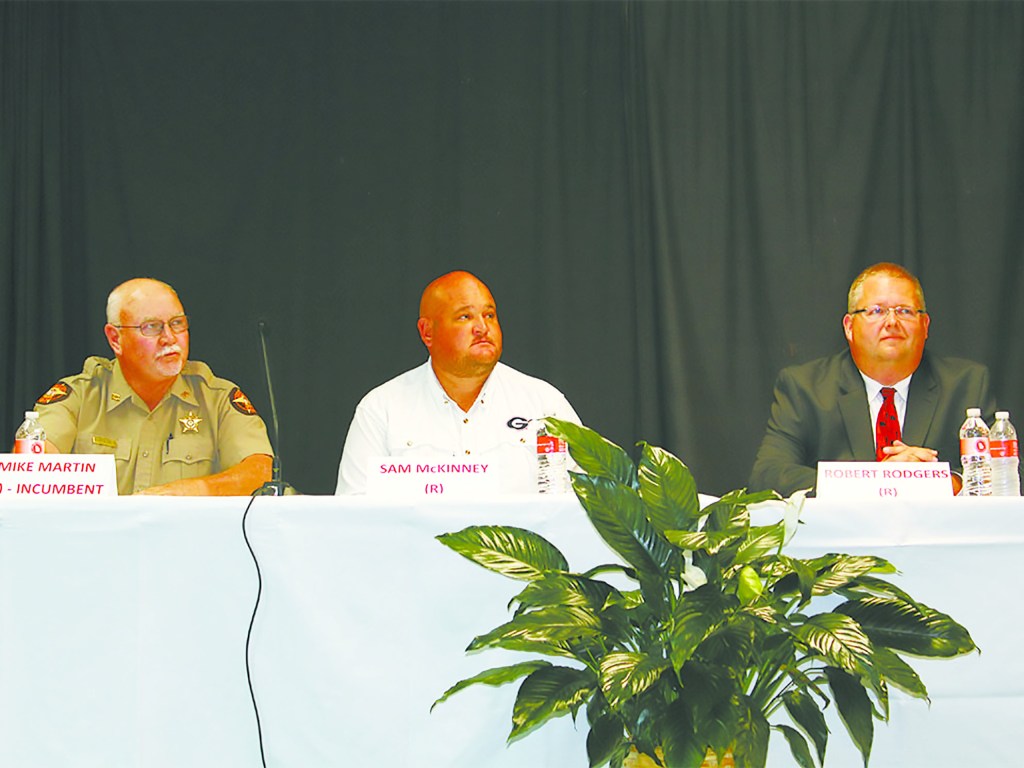 ROCHELLE — Three of the four candidates for Wilcox County Sheriff showed up Tuesday night in Rochelle for the round robin of questions. State Senator Greg Kirk served as moderator for the event, which was held at the Newt Hudson Agriculture building. Contenders Sam McKinney and Robert Rogers joined incumbent, Mike Martin on the stage. Democratic candidate Carl Thompson was not present.
Senator Kirk asked a number of questions of the candidates ranging from their experience, education and training to the role, priorities and problems facing Wilcox County. Each candidate was given the same questions and the order in which they answered was rotated. On the question of experience, education and training Sheriff Martin said that he has 24 years in Law Enforcement as a deputy, a criminal investigator and as Sheriff and a high school diploma and numerous hours of in service training. Sam McKinney stated he had a High School diploma and 900 hours of in service training and has been a deputy since 2009. Robert Rogers said he has 15 years in Law Enforcement as a deputy and Investigator and over 1,400 hours in service training. In summarizing the candidates response Sheriff Martin said his top priorities was to protect the citizens, get rid of drugs and operate within the budget. McKinney’s priorities included deputy safety and concerns for the citizens. Robert Rogers looked to improve the costly jail, increase patrol for theft and drugs and deputy’s safety.
In most cases the general answers to the questions were the same but there were a few questions with a difference of opinion. On the issue of gang activity both Rodgers and McKinney shared a somewhat difference of opinion from Sheriff Martin. Martin contends that there isn’t a significant gang problem in the county and McKinney and Rodgers disagree. On the question of changes if elected, Rogers said that he would be applying for grants on a regular basis to reduce expenses on the county and provide service to the citizens above and beyond the protection part of the job. Sam McKinney stated that better training for officers and higher pay would be on his list and Sheriff Martin said he would be working harder on drugs and to make it better in Wilcox County.
On the question of the “Many” roles of a Sheriff, Rodgers stated that budgeting and finding ways to save money were important and that the media is an important tool in a Sheriff’s office. Martin stated that the media was not that important and that “word of mouth” works in a small community. McKinney said word of mouth doesn’t always work. All candidates agreed that the Sheriff’s race should be a non-partisan race.
In the end Senator Kirk thanked all three candidates for showing up and answering the people’s questions. They face off in the General Primary on May 24th.