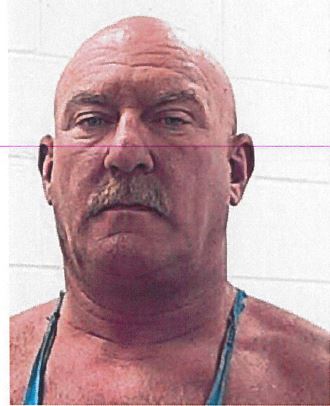 ELKO, GA. — An employee with the Dooly County Sheriff’s Office was arrested Sunday night and is facing several charges after he was reported to have been standing naked in the street where he lives.

A report from the Houston County Sheriff’s Office revealed that 54-year old Michael King of Elko was arrested on four counts of child molestation and one count of public indecency.

At approximately 6:16 p.m. on Sunday, May 15 Dep. C. Winnett with the Houston County Sheriff’s Office was dispatched to a Third Street address in Elko. Upon arrival a neighbor of King’s reported her daughters and friends witnessed King standing in the street, completely naked. He was staring at them and masturbating. Allegedly, one witness took a photograph of King, and witnesses were able to identify him. All five victims pointed out the exact residence where the suspect lived, 503 Third Street in Elko. Victims informed the deputy the suspect was mowing his yard and described him as a large, white male with a baldhead.

Deputies Winnett and Robillard made contact with King at his residence, who stated he was the only person that lived at the residence, but denied the allegations. He was taken into custody and transported to the Houston County Detention Center.

The investigation led authorities to King’s LinkedIn profile, which stated he was employed as a jail administrator for the Dooly County Sheriff’s Office.

Dooly Sheriff Craig Peavy confirmed King’s employment with the department, but clarified he was not an officer, nor anything to do with administration, but that he is a civilian employee. Sheriff Peavy said with these allegations his employment status with the department will be under review, pending the results of the investigation.