Rigby sworn in by Governor Deal 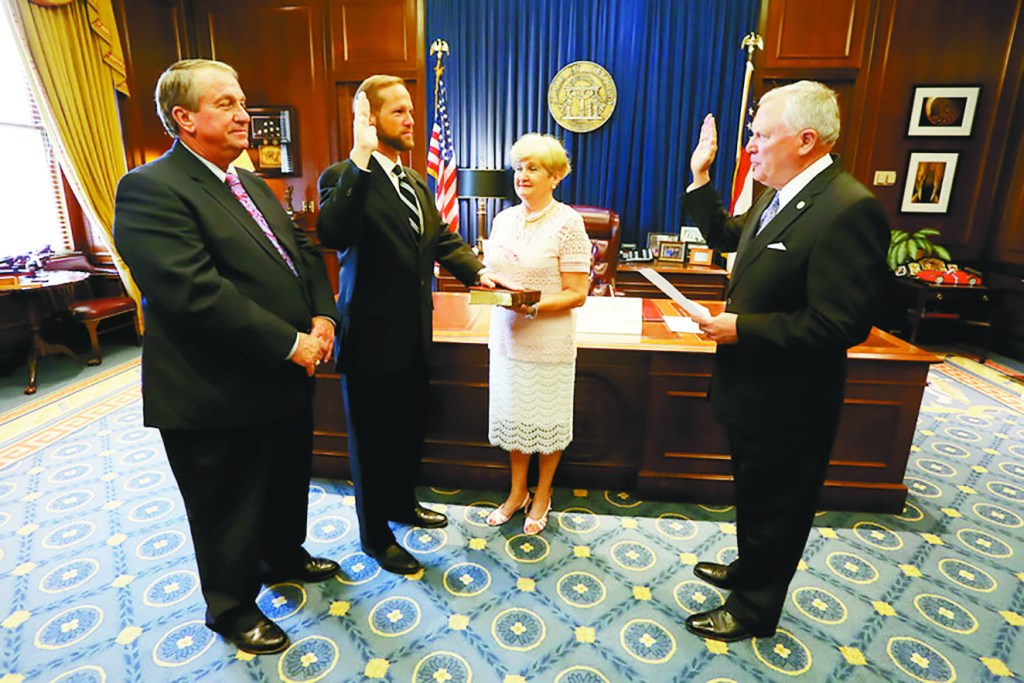 Photo courtesy of Gov. Deal’s Office Brad Rigby, recently appointed district attorney for the Cordele Judicial Circuit is sworn in by Governor Nathan Deal on Thursday, May 19 at the Capitol. He was joined by his parents; Father, Farrell (left) and his mother Dyanne who held the Bible for the swearing in.

ATLANTA — Governor Nathan Deal officially swore newly appointed District Attorney Brad Rigby into office during a special ceremony held at the capitol Thursday.
Family, friends and colleagues of Rigby attended the ceremony and his parents, Farrell and Dyanne Rigby stood by his side as he was sworn in, his mother holding the Bible as he took his oath.
Governor Deal announced earlier this month that Rigby would be the successor of the Honorable Denise Fachini, who resigned from the position to run for a Superior Court Judgeship for Crisp County following the retirement of Judge John Pridgen. Rigby served as chief assistant district attorney for the Cordele Judicial Circuit, which is comprised of Crisp, Dooly, Wilcox and Ben Hill Counties.
He earned a bachelor’s degree from Mississippi State University and a law degree from the Lamar School of Law at the University of Mississippi. He previously served as a special assistant district attorney in the Prosecuting Attorneys’ Council of Georgia and as an assistant district attorney in the Tifton Judicial Circuit.
“I am thankful for the confidence that Governor Deal has expressed in me through this appointment as District Attorney of the Cordele Judicial Circuit,” said Rigby.  “Moreover, I am grateful for the support of the many citizens of our Circuit over the past several months.  I look forward to serving all of the people of our four- county area as we strive to make our communities safer and support the victims of crime through the court system.”