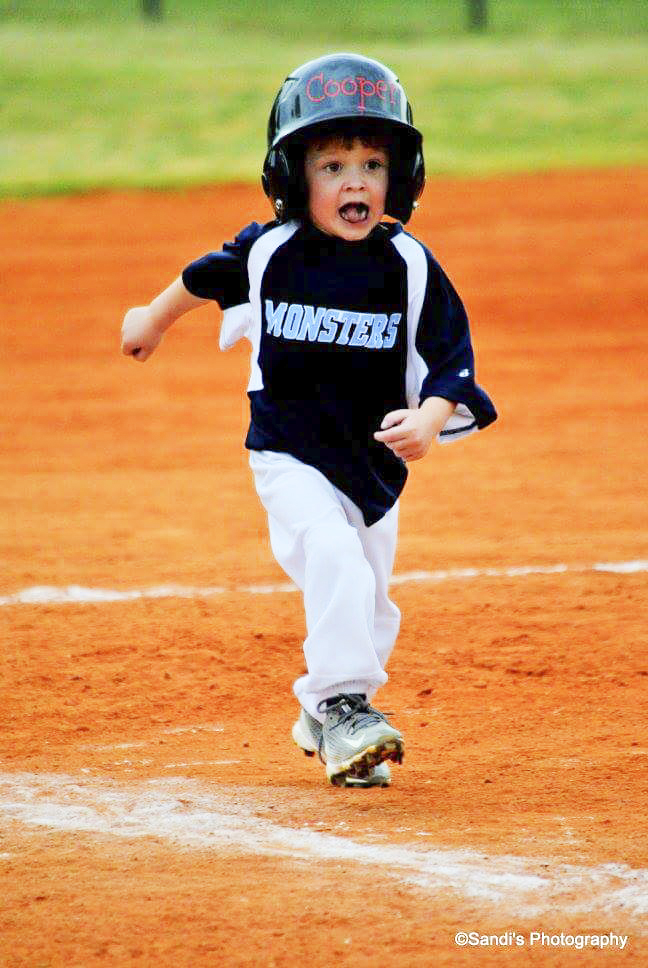 CORDELE — To see 4-year old Cooper Powell you see a typical toddler who is, as his mother Jess Green describes, “ALL BOY!”

The son of Jess Green and Michael Powell of Cordele, Cooper loves baseball and Hot Wheels. He always seems to have a smile on his face. He quickly captures the heart of everyone he comes into contact with. What you would not see from the outside is Cooper has struggled, since birth, with a rare heart condition known as Hypo-plastic Left Heart Syndrome or HLHS.

HLHS is a congenital heart disease. Green said 19 weeks into her pregnancy a sonogram revealed that Cooper’s heart was small and flat. She was sent to a Maternal Fetus Specialist in Albany who, at 21 weeks made the diagnosis that Cooper had HLHS.

“I got really depressed,” said Green. “I cried all the time for the rest of my pregnancy.”

Green recalled having to make regular visits to the doctor for observation, to confirm that her little boy was still alive and moving. She admits just feeling mad at the world, says that Michael remained positive.

“I was given the option to abort the pregnancy,” she said. “I chose not to do that. I am glad I did not.”

Green and Powell were then given two options. They could attempt a heart transplant, which would have had to be done within the first 72 hours of Cooper’s life or they could perform three surgeries. They opted for the second option. Just three days after he was born Cooper underwent his first surgery. At three and a half months old he received his second surgery. On June 8th Cooper and his family will travel to Atlanta for his third and final surgery.

The goal of the surgeries, which are kind of like a bypass, is to create a new, functional heart for the toddler. The first, know as the Norwood was to put a shunt in. The goal of the second surgery, the Glenn, is to take the shunt out. The right pulmonary artery is connected directly to the vena-cava and bring deoxygenated blood from the upper body to the heart and sends directly to the lungs.

“Right now his head and lungs are getting oxygen,” said Green. “The last surgery, called the Fontan, will be to bring oxygenated blood to Cooper’s entire body to compensate as he grows.”

Cooper’s oxygen levels stay between 75-80 right now. His fingers, toes and lips are blue and cold because of poor circulation and low blood levels. Green says the final surgery will be the simplest of the three. They will be in Atlanta for pre-op on June 7. The June 8 surgery, she said could last up to eight hours, but they will not know until they arrive.

“They will have to do some very delicate patchwork on his valve because of leaks,” she said. “Once surgery is complete he will be in the NICU for the first few days until he is off the ventilator and the chest tube comes out. During that time we will not be able to spend the night with him. That will be very difficult for me because we will only be able to see him at certain times, but once he is move to what they call a step down unit we will be able to stay in the room with him.”

Green says they will be staying at the Ronald McDonald House, just around the corner from the hospital, which she describes as a God send.

“I don’t know what we or the other families that have stayed there would do without the Ronald McDonald House,” she said. “It is amazing.”

Though he has so much on his plate for such a small boy, Cooper’s mom says he does not let it slow him down. Three weeks ago he almost had a stroke and since then he is supposed to be on oxygen 24 hours a day, 7 days a week. This, Green says, presents a challenge for the tike, because he wants to be active.

“If his heart rate gets over 140 that is heart attack level for him,” she said. “He has suffered a decline in the past three-four months, but at four-years old he knows what his limits are. During his first two surgeries he was not talking yet. Now he is vocal and he can tell us when he hurts or when he is tired.”

Cooper’s favorite pastime is of baseball. He plays T-Ball, which she says really keeps him going, and he loves to watch 8 and under Girl’s Softball. Green says he loves being at the ball field and would be there day and night if he could. She says it is his happy place, something he never gets bored with.

“Sometimes at night he sleeps with his glove in his hand,” said Green. “Once his surgery is complete he will have a recovery period, but we do not know if he will be able to play baseball. We will just wait and see what happens.”

Cooper has a big sister Annaleigh, who is seven and according to Green she is a bit of a mother hen where little brother is concerned. Green says Annaleigh is very understanding when it comes to the attention Cooper needs. She says both of their children are a blessing and they could not ask for better kids. Annaleigh is also very active, especially in pageants. Aside from Annaleigh, Green says they have a great deal of, not only family support, but support from teachers, friends, churches, the entire community, people who know Cooper and people who have never even met him or their family.

“We have received so much community support,” she said. “I believe that Cooper is on the prayer list for every church in the area. We receive messages on Facebook. He just seems to inspire others. He struggles so much, but is so happy. He is always smiling.”

Green said his teacher Laurie Herrington and Paraprofessional Joyce Sanchez at Crisp County Pre-K have really gone above and beyond their job where Cooper is concerned this year. She proclaims them as two of the best things to ever happen to her son.

“I did not think I could feel so safe and secure with someone other than family caring for Cooper,” she said. “They are his Angels. They send me pictures throughout the day. They let me know how he is and notify me about everything to do with Cooper. I also have to give credit to his pediatrician Nikkia Johnson and his Cardiologist Brian Cardis. Having those people that we trust is amazing. I don’t know what we would do without them.”

Green says she and Michael are also humbled by the donations that people have given to assist with their expenses when they travel to the doctor. Anyone wishing to make a donation can make that contribution at Planter’s First. The name on that account is Cooper Powell.

“We are so grateful to everyone for the messages, calls, texts, donations and most especially the prayers,” she said. “We hope you will continue to lift Cooper up in your prayers.”