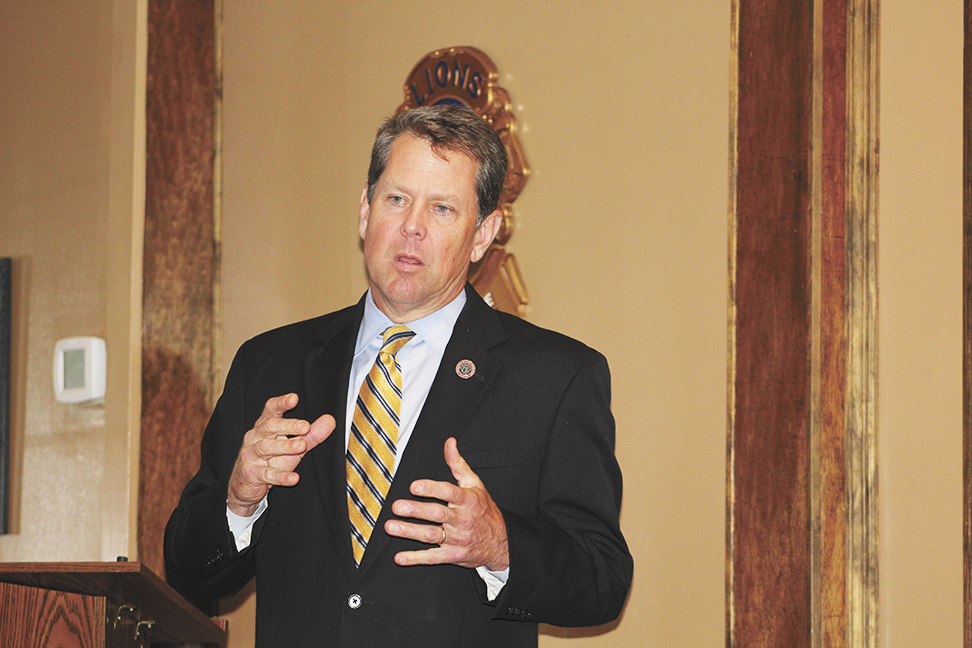 CORDELE — Secretary of State Brian Kemp recently gave an informative lecture to the members of the Crisp County Lions Club at their most recent meeting.

Kemp, who has been in office for 6 1/2 years says the last 12 months has been the busiest, partially due to the changes in the election schedule.

“We have a lot going on,” said Kemp. “We handle approximately 1 million filings each year. This year we have done 550,000 in the first three months.”

Kemp said candidate qualifying and challenges, absentee ballots going out and the primary election had been keeping his office very busy. He said there is something going on every day and having the primary going on during legislation made for a very busy environment.

“We have trained, experienced investigators that handle all investigations into election problems,” he said.

According to Kemp there are a lot of open Superior Court Judge races and over 120 contested sheriff’s races around the state. With the primary ended now there will be more focus on the coming presidential race. He said that a lot of races ended in the primary because there was no opposition.

“There are also some heated Congressional races,” he said.

Kemp also talked about the new voter registration system and how convenient it is for voters. He said over a year ago 365,000 Georgians used the on-line voter registration. He said not only is it more convenient, but it puts very little work on the county and alleviates a lot of problems. Currently the state is working on involving high school students in the process and they hope to have 900 involved next year.

There are 200 professions licensed through the state, all through Kemp’s office and they are working diligently to make government more efficient.

“I feel good about where we are,” he said. “We fight every day to work on the little things.”

The state office is also working on Georgia having more say in the presidential election. He said it is important for presidential candidates to know what is going on in Georgia such as the great military bases and the inland port.