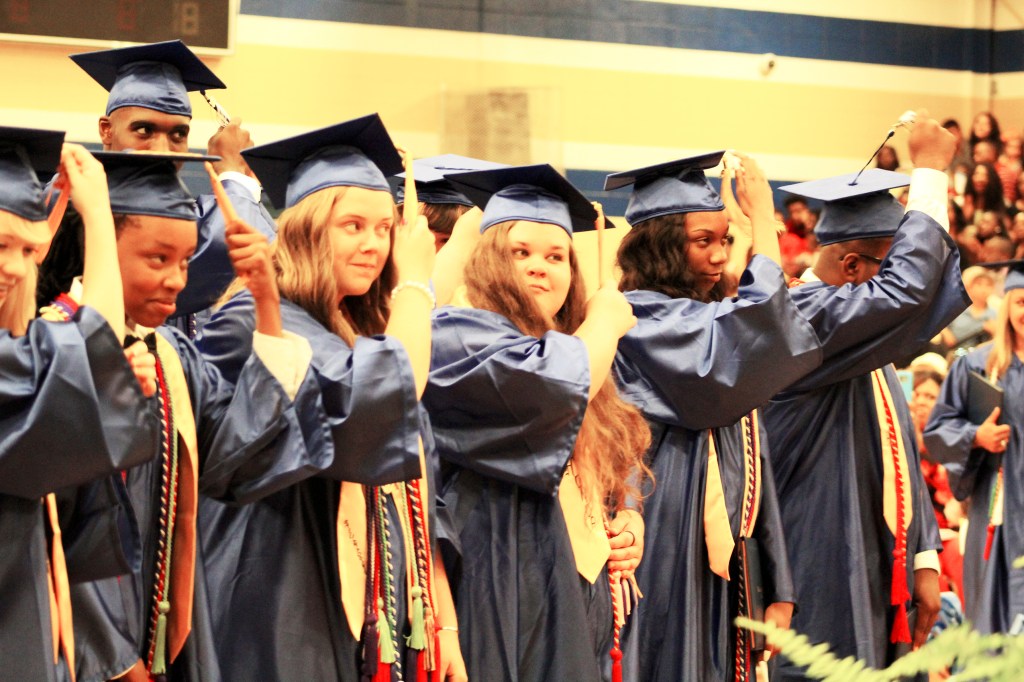 ROCHELLE  — A total of 77 graduates crossed the stage in the Wilcox County High gymnasium Saturday morning, to accept their diplomas as the graduating Class of 2016. 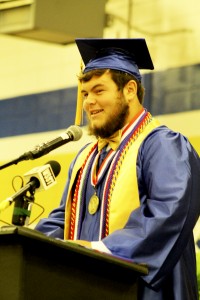 Graduates entered the gym to Mendelssohn’s “War March of the Priests” which was followed by a collect given by Abby Holliday. The Pledge of Allegiance was led by Emily Futch after which the Wilcox County High Chorus sang the National Anthem.

Principal Chad Davis gave opening remarks which was followed by a welcome and address by Salutatorian Ana Claire Gordon.

Gordon took inspiration from a poem she read in the summer of 2015 entitled “The Dash” by Linda Ellis.

“The DASH in the poem refers to the date of birth and the date of death on a tombstone,” she said. “The punctuation mark represents a lifetime that unfolds between the two dates that it connects. The poem poses a question; So when your eulogy’s been read with your life’s actions to rehash, would you be proud of the things they say about how you spent YOUR DASH.”

“When we are buried, we have no control over the two dates that will be placed on our tombstone,” Gordon said. “However, we do have control over what happens between our births and our deaths.”

Gordon expressed her hope that the message would strike a chord with her fellow graduates so they may be more sensitive concerning their DASH.

“I encourage you to seek the Lord in prayer and let Him be your guide from this day forth to lead each of your days so that they will be filled pursuing God’s purpose and fulfilling every area that God has planned for you.”

“The Class of 2016 is more than a class,” he said. “We are a family. Going our separate ways will be 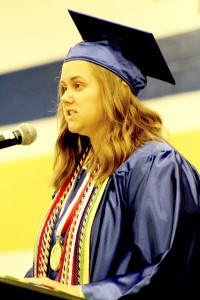 different, and for some of us it will be difficult. We’ve experienced almost everything together for 14 years, now we won’t have each other to find our classroom on the first day, see if we can change schedules together, or text each other all throughout the night checking progress on papers that are due in a few hours.”

McGuinty said he hoped the Class of 2016 will manage to stay in touch and continue to support each other even though they will be hundreds, some event thousands of miles apart. ‘

“Today, we all graduate and it will probably be the last time we are all together,” he said. “But we will remember growing up together for the rest of our lives.”

He ended with a quote from the Disney Classic “Lilo and Stitch,” “Ohana means family. Family means nobody gets left behind or forgotten.”

Principal Davis returned to the podium to officially present the candidates of the graduating class to Superintendent Julie Childers who accepted the candidates. Davis announced the names of the graduates who were presented their diplomas by Berry Collier, chairman of the Wilcox County Board of Education.

Shameka Redding them introduced the senior slide show and Davis then instructed the graduates to turn their tassels which the group did in unison.

Graduates exited the gym to the traditional “Pomp and Circumstance.”