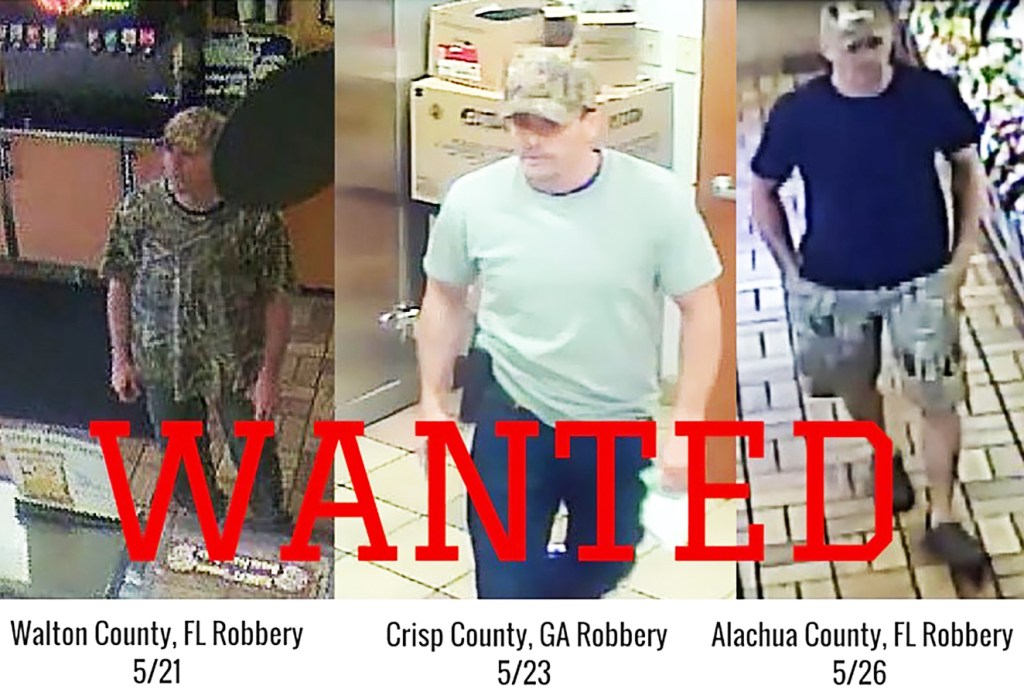 WALTON COUNTY, FL. — A man responsible for the armed robbery of three Subway stores, in two states, in one week is being actively sought by multiple law enforcement agencies in the southeast.

On May 21st at 1748 hours a suspect entered the Subway at 10859 US Highway 98 in Miramar Beach, Florida. The man waited until he was sure he would be alone in the store and entered the employee area. The suspect brandished a firearm robbing two female employees at gunpoint.

On May 23rd at 1901 hours a suspect entered the Subway store at 1814 16th Avenue East in Cordele, Georgia. The man purchased a sandwich and waited until he was alone and forced two female employees into the back room at gunpoint. He robbed the store of an undisclosed amount of money and stole one of the victim’s cell phone, which was later recovered.

On May 26th at 1530 hours a suspect entered the Subway at 6666 W Newberry Road in Alachua, Florida. The suspect waited until he was alone in the store before brandishing a gun and demanding money from the cashier.

The suspect in all three robberies is described as a white male, 5’9 to 6’0 tall, wearing a camouflage style ball cap.  In two cases (Walton County, FL and Crisp County, GA) the suspect is seen fleeing in a tan 4-door Chevrolet pickup truck. He should be considered armed and extremely dangerous. If you have any information please call the Walton County Sheriff’s Office at (850)-891-8111.