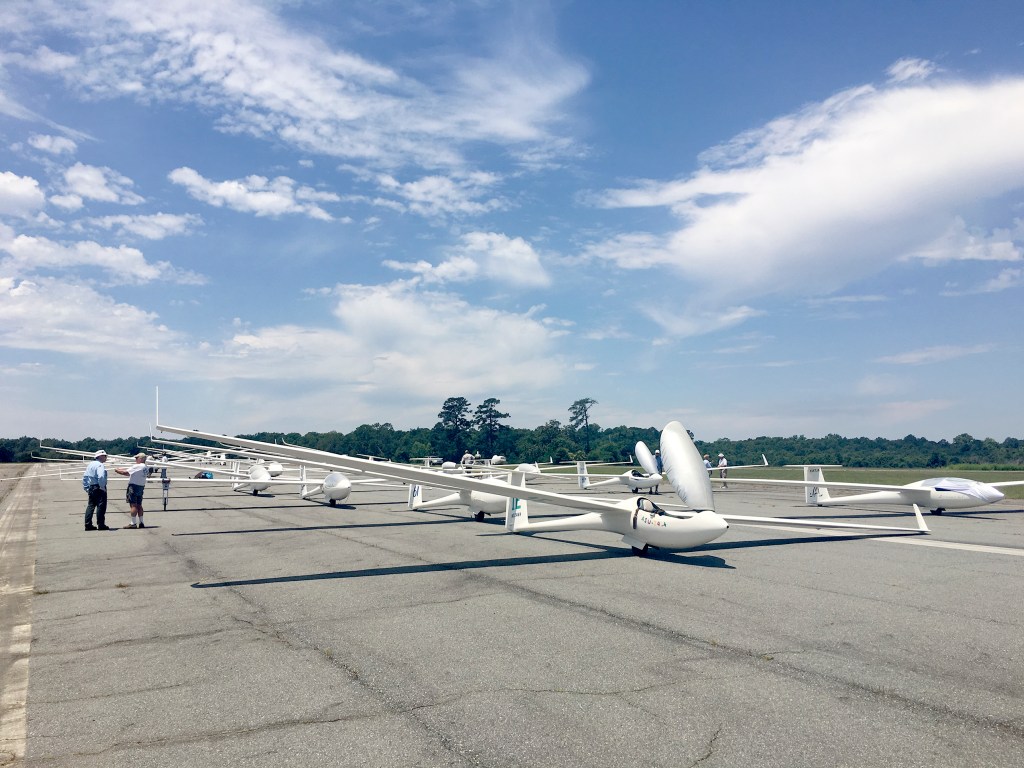 Submitted By Andreea Alexandrescu Sailplanes returned to Crisp County this week for their annual Region 5 South Soaring Contest. Pictured are a group of gliders waiting to get in the air on one of the days of competition.

CORDELE — If you have looked into the Cordele sky this week you may have noticed the sail planes have returned to the area.

This week the Annual Region 5 Soaring Contest was held at the Crisp County Airport making this over 40 years the group has competed here.

The event is sanctioned by the Soaring Society of America and pilots competed within one of 10 regions around the U.S. Pilots from other regions can compete within other regions but only if there are slots available after those within the region have registered.

“There are 26 competitors this year,” said Andreea Alexandrescu who helps coordinate the event. “There have been more in the past, but there was a National Competition going on as well.”

Alexandrescu said the Region 5 South Competition is divided into three categories; 18 meter, Sports and FAI combined. Class is based on glider characteristics such as wing span.

Pilots are given a task each day before launch. They are assigned a territory they must fly within a certain pattern. The gliders flight computer records the flight. Finishing first has no bearing on competition. It is a matter of who finishes the task in the fastest time and hits their checkpoints properly. Points are awarded to the pilots. “The aircrafts are aerodynamic in shape and the pilot must fly and sustain flight without an engine,” said Alexandrescu. “Some do have engines in case of adverse weather and it is required that all pilots carry a parachute.”

The Region 5 South Soaring Competition is hosted each year by Mid Georgia Soaring. Alexandrescu said they enjoy coming back to Cordele year after year.

“Everyone here is so nice and supportive,” she said. “The Chamber of Commerce is very supportive and accommodating. The rain took a couple of our days away but we always enjoy being here. We start making plans to return before the event is even over. We are already making our plans for 2017.”

Alexandrescu said the local airport is also very helpful, allowing space for those with RVs to camp out and clearing hanger space for the tow planes used to launch gliders. She also mentioned the hospitality of local merchants.

The group will be pulling out of Cordele tomorrow after the end of competition today.