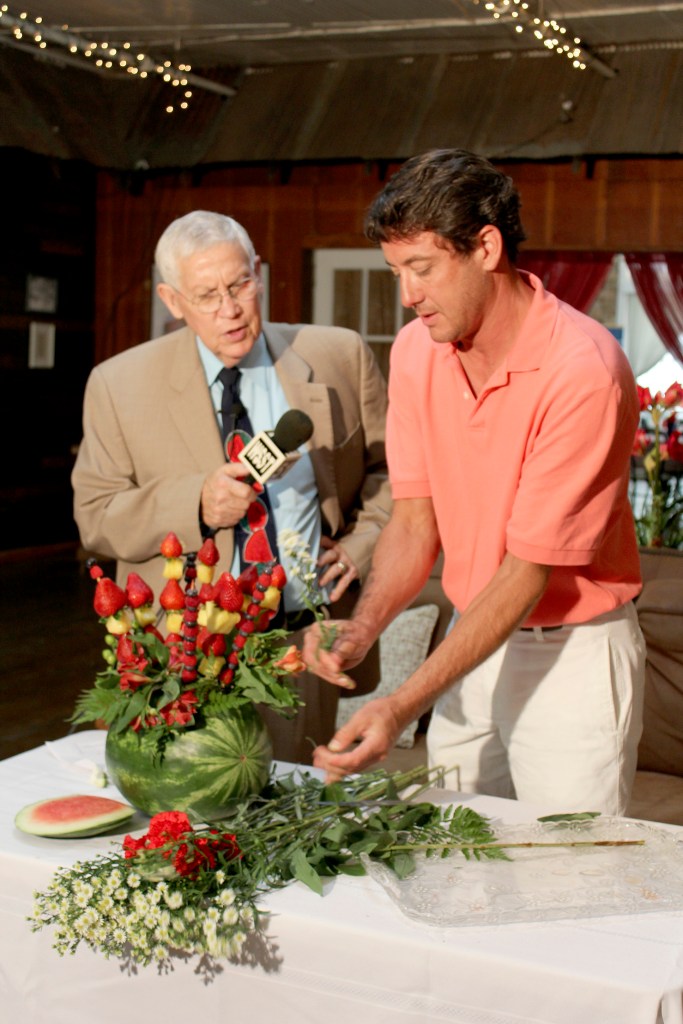 CORDELE — WSST-TV personality Phil Streetman hosted the annual Downtown Taste of Melon Wednesday The telecast was filmed at the Cordele Main Street Office and featured a myriad of guests.

Crisp Lions Club President Gary Cross was on hand to promote the club’s 2nd Annual Cornhole Tournament as part of Watermelon Days. The event was set for Saturday, June 18 with the first bag flying at 9 a.m. at Turner Park.

This Is Your Life honoree, Judge John Pridgen was also a guest of Streetman along with Crisp County Extension Agent Randy West. West talked about the local 4-H including events the club sponsors during the festival such as the Dog Show and the watermelon slice giveaway on the day of the festival.

Joe Ward of JW Designs gave a demonstration on how to create your own edible arrangement at home using, of course a sweet Cordele melon and other fruits. Mother/daughter duo, Dawn and Catherine Mayo, demonstrated how to make a tasty Watermelon Stack with chunks of watermelon, feta cheese, and blueberries.

Clara Dunbar was the 2016 winner of the Watermelon Word Hunt, sponsored annually during the festival by Holmes Construction of Cordele. Dunbar has won the contest eight out of nine years she has participated. Contestants each year must see how many words they can create from the festival theme. This year’s theme is “Makin Music thru the Melon Vines” and from that the Word Master found 5,628 words. All words must be in the dictionary and no names can be used. Dunbar received a prize of $25.

Also highlighted during the program were the winners of the 2016 Community Wide Window Decorating Contest sponsored by the Downtown business organization. Southwest Georgia Rehab, represented by Laura Stephens received first place and a prize of $100. The Crisp County Tax Assessors Office received $75 for their second place window decoration. Accepting on their behalf was Melissa Reed and Deborah Diaz. Third place and a prize of $50 went to Cook Industrial Electric who was represented by Julie Nutt.