This is Your Life Judge John Pridgen 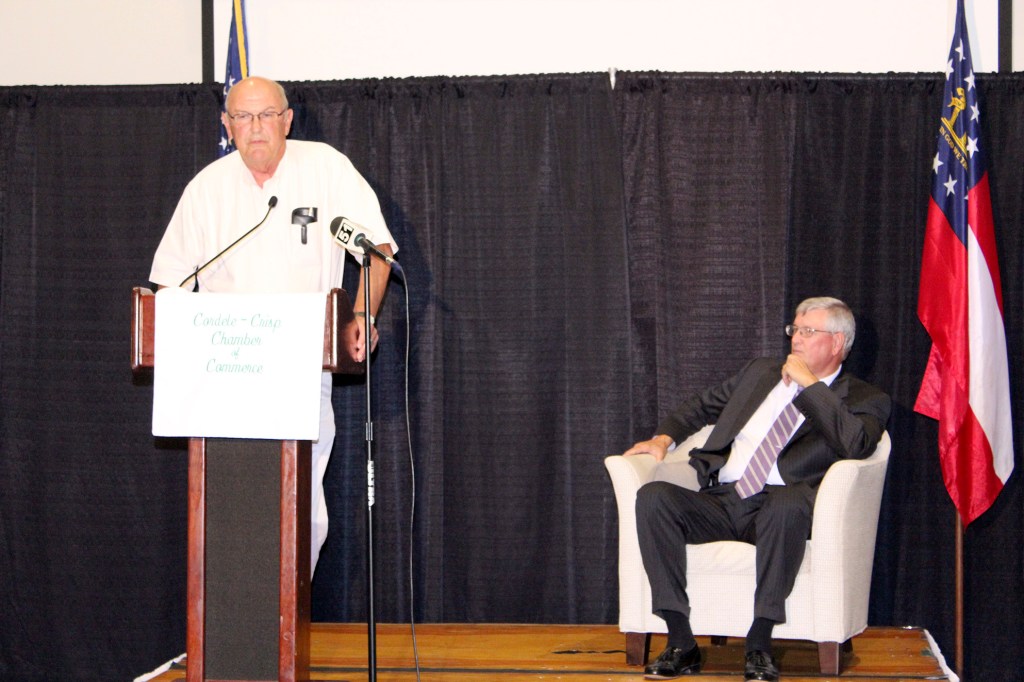 Crisp County Superior Court Judge John Pridgen, 2016 This is Your Life honoree sits in the “hot seat” as he is “roasted” by long-time friend Dr. William Pannell.

CORDELE — It was a packed house at the Lake Blackshear Resort as family, friends and colleagues came out to roast and toast Superior Court Judge John Pridgen the 2016 This is Your Life honoree.

“Court is in session,” announced Phil Streetman of WSST-TV as he welcomed guests before leading the crowd in the Pledge of Allegiance, followed by the singing of the National Anthem by Hannah French. Reverend David Thompson offered an invocation before dinner. 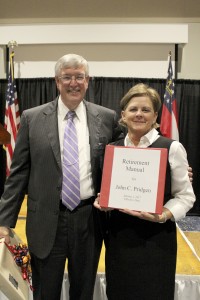 After reading a poem for Pridgen, secretary Cheri Slade presented him with a retirement manual to assist him as he adapts to life without a secretary keeping his schedule.

With dinner down, the gloves were off as some of those who knew Pridgen best took the stage to toast the long-time judge. There was more roasting than toasting going on with the good judge sitting patiently in the “hot seat” as speakers shared their experiences. Even one of Pridgen’s children, son Rob, was among the toasters. Others included long-time friends and colleagues Dr. Bill Pannell, Sheriff Billy Hancock, recently elected Crisp County Commissioner Dickie Dowdy, Pridgen’s secretary Cheri Slade and Dooly County Probate Judge Rooney Bowen III.

Pridgen’s son Rob described his dad as a man who “was ALWAYS right,” sharing a few humorous anecdotes about growing up the son of the judge.

“Ben, Laura and I could not have asked for two better parents,” he said. “He taught me to do what’s right and stand up for what you believe in.”

Other speakers, had some pretty interesting tales to tell about the judge including time on the golf course.

Slade shared her experiences with Pridgen through a poem she wrote for the occasion and also presented him with a retirement manual to help him out until he gets adjusted to life without a secretary planning his schedule, since his wife Jan has reiterated on more than one occasion she is not his secretary.

After properly roasting the judge, speakers also lauded his long and distinguished service to the citizens of Cordele-Crisp County and the Cordele Judicial Circuit which in addition to Crisp includes Dooly, Wilcox and Ben Hill Counties.

He was described as a fair man, a compassionate man. He was a person who loved his job.

Judge Pridgen has served as a Superior Court Judge in the Cordele Judicial Circuit since 1999 and as Chief Judge of the Circuit since 2005. He began practicing law with the firm of Davis, Pridgen & Jones in 1976. He was elected as District Attorney for the Cordele Judicial Circuit in 1986 and served in that capacity until his appointment to the Superior Court bench by Governor Roy Barnes in 1999. Judge Pridgen.has previously served as President of the District Attorneys Association of Georgia, as Chairman of the Prosecuting Attorneys Council of Georgia, and as President of the Council of Superior Court Judges for the State of Georgia. He has also served on numerous committees of the Council of Superior Court Judges and also on the Georgia Supreme Court Technology Commission. 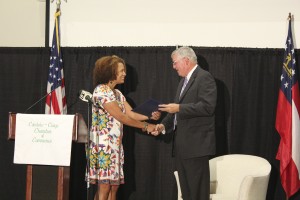 Becky Crissman/Cordele Dispatch
A representative from Congressman Sanford Bishop’s office presents Pridgen with a letter from Bishop honoring his achievements.

Judge Pridgen has also been very active in the community volunteering in his church, the Touchdown & Dugout Clubs, Cordele Little League and a variety of other organizations for many years.

Born in Macon, Georgia, Judge Pridgen grew up in Cordele, Georgia. He graduated from the University of Georgia with a B.B.A. degree in 1972 and received his Juris Doctor from the University of Georgia School of Law in 1975. He is a member of the First United Methodist Church in Cordele. He and his wife, Jan, recently celebrated 43 years of marriage. They have three children and five grandchildren.

“This has been a lot like a funeral preview,” said Pridgen. “Two preachers, a slide show, a program with my picture on it. I hope that one will go as good as this.”

Pridgen thanked the community for the support throughout the years.

“It has been great to work with so many wonderful people,” he said. “It makes the job easy when you surround yourself with really good people.”

In an earlier interview  Pridgen said he was looking forward to spending more time with his grandchildren and with his wife on the farm.

“Most people say they are busier when they retire,” he said. “I guess we will see.”