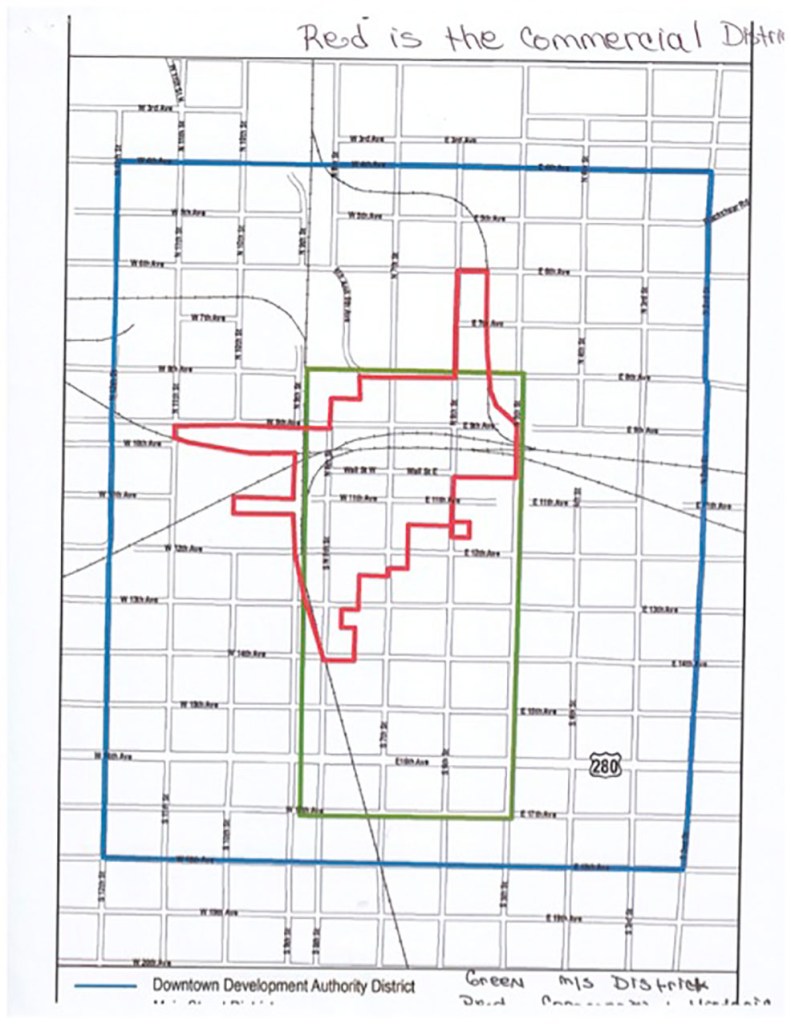 Submitted The green rectangle on the above map highlights the boundaries of where the Downtown Entertainment District will be located if approved.

CORDELE — City Commissioners here approved the first reading to amend the alcohol ordinance for the city to accommodate the formation of a Downtown Entertainment District.

During the commission’s last meeting, Anna Hurt of the Renaissance Strategic Vision Plan Steering Committee proposed the change to the ordinance in an effort to entice new business into the downtown area. If passed and the Downtown Entertainment District is created the proximity requirements would be lifted in regards to schools, college campuses and churches (ordinance Section 3-137) for food establishments to be eligible to apply for and obtain an alcohol license.

The license would be for Consumption on Premises only and part of the qualifications would be that the applying establishment shows that 60% of their sales would be from food. The Downtown Entertainment District would encompass only the Main Street District area from 8th Avenue on the north boundary, 17th Avenue on the south boundary, 8th Street on the west boundary and 5th Street on the east boundary. The motion was carried by a vote of 3-1 with Commissioners Vesta Beal-Shephard, Royce Reeves, and Wesley Rainey voting in favor of the motion and Commissioner Jeanie Bartee voting in opposition.

At the request of Commissioner Shephard, Chief City Code Enforcement Officer Jack Wood was present at Tuesday’s meeting to address the commission and answer any questions. As a new commissioner, Shephard said she had a few questions for Wood.

Wood fielded questions about his credentials and what he does in the code enforcement office. He informed commissioners the City of Cordele was one of the few areas that have a certified police officer as chief code enforcement officer. Woods said that zoning was an important aspect of the job. There are 17 zones in the City of Cordele. Woods’ office is also responsible for assigning addresses for the city and making sure the proper permits are issued before any structural building on property in the city limits.

Shephard also informed the commission that she had recently received complaints for citizens about speeding in on 13th Street, an issue she herself has witnessed. She asked that the city erect some STOP signs and Children at Play signs at intersections on that roadway to make it safer for children. Commissioner Reeves advised he had knowledge of the same in the area of the St. Paul Presbyterian Church Day Care and asked for speed bumps or signs to be placed in that area. City Manager Edward Beach said he would look into getting that handled.

Also on the agenda:

• Commissioners approved a resolution for a supplemental lese under the GMA Direct Leasing Program for two Pierce Pumper Trucks in the Fire Department. The lease amount will be for $579,710 for 10 years with an interest rate of 2.370%.

• Commissioners approved the 2015 CDBG award recommendation for Sanitary Sewer Rehabilitation and Improvements. They awarded the project to Southeast Pipe Survey Inc in the amount of $433,092.61. Beach advised that the project should begin in August.