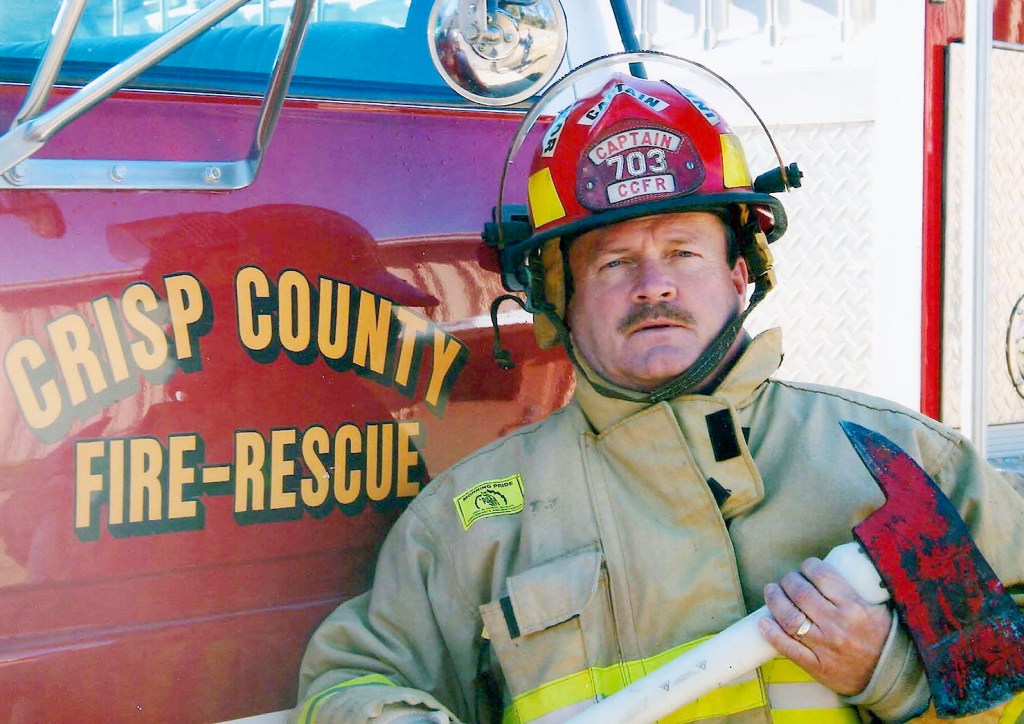 CORDELE — As a young child he would watch the boxes and cans burn in the outdoor trash pile and was captivated as he observed the fire skipping from one box to the next.  He would imagine those various size boxes to be houses and buildings and was totally captivated with the movement of the fire.  Those images, witnessed by a young boy, turned out to play a monumental role in the life of William M. Knight, Jr.

Growing up in Bainbridge, Georgia Bill delivered newspapers for the Post Searchlight and played football for the Bearcats.  After graduating in 1973 he took a job with Glynn Country Fire Rescue where he was mentored as a rookie by Chief W. R. Cavanaugh, Captain Van Vanalstine and Carl Johnson. From the seasoned Johnson he learned the many skills of firefighting. Most importantly – how to come back home alive.  Arriving at his first house fire, he was shaking in his boots as he witnessed the fully involved structure fire – such a very different sight from those trash fires he remembered as a young kid.  As he packed out, Johnson told him to ‘go put the fire out’.  As Bill turned the nozzle on and started spraying the fire he felt his feet lift off the ground.  Unexpectedly he felt himself floating toward the fire.  The veteran trainer had picked the fearful rookie up by the seat of his turn out gear, moved him closer to the fire and said something that would resound with the man throughout his career. “Come on boy, you got to get closer and attack the dragon. No fear!”

After a few years he moved back to Bainbridge where he met and married the love of his life Beverly.   Working his way through several different sales and management jobs he just couldn’t shake that passion of Fighting the Dragon or the satisfaction of helping those when they were facing the direst and frightening moments of their lives.  In 1980, the same year his daughter Misty was born, Bill joined the Attapulgus Volunteer Fire Department and under the direction of Chief Roy Spooner became training officer until leaving and joining the Decatur County Fire Rescue in 1987.  During this time, and with the full support of Chief J. E. Spooner, he learned more about the behavior of fire, the investigation of the origin and cause of fires and was promoted through the ranks from firefighter to engineer.

In 1992, he took a position with Crisp County Fire Rescue.  Under the leadership of Chief Guy Jones, who knew how passionate the firefighter was about continuing his career in the fire service, presented him the opportunities to continue firefighting classes, fire investigation training and his EMT education.  Sworn under another mentor, the late Sheriff Donnie Haralson, Bill became a mandated officer in 1994 and subsequently the Crisp County Fire Investigator and is currently sworn under Sheriff Billy Hancock.  Through the ranks he achieved Captain of C Shift in 1996, obtained certifications in Rope Rescue, Confined Space Rescue, Structural Fire Control, Flammable Liquids Fire Control, Pressurized Container Control and Extrication.  As a post-certified instructor, he has taught classes at the Fire Academy and throughout the State of Georgia.  He continued his education and training in fire investigations and obtained elite status of Certified Fire Investigator through the International Association of Arson Investigators.

Throughout his career with Crisp County his enjoyment for teaching led him to become an Explorer leader where his group won several trophies in various competitions.  Their fearless leader Bill even took home the trophy for Quick Dress!  Teaching others about the fire service, fire behavior and how to really be a team player continue to be his passions.  He continues to be actively involved in the Georgia Fire Investigator’s Association as well as the Southwest Georgia Fire Investigator’s Association.  As a current Board Member and immediate Past President of the GFIA, he also has held the positions of Secretary, 2nd Vice-President and 1st Vice-President.  Captain William M. Knight, Jr. thank you for thirty-five years of service to the people of the state of Georgia, your twenty-four years of service to the people of Crisp County and the enormous sacrifices you’ve made over the years to protect us all from The Dragon.

Bill is continuing his career as a fire investigator with Cunningham Investigative Associates.