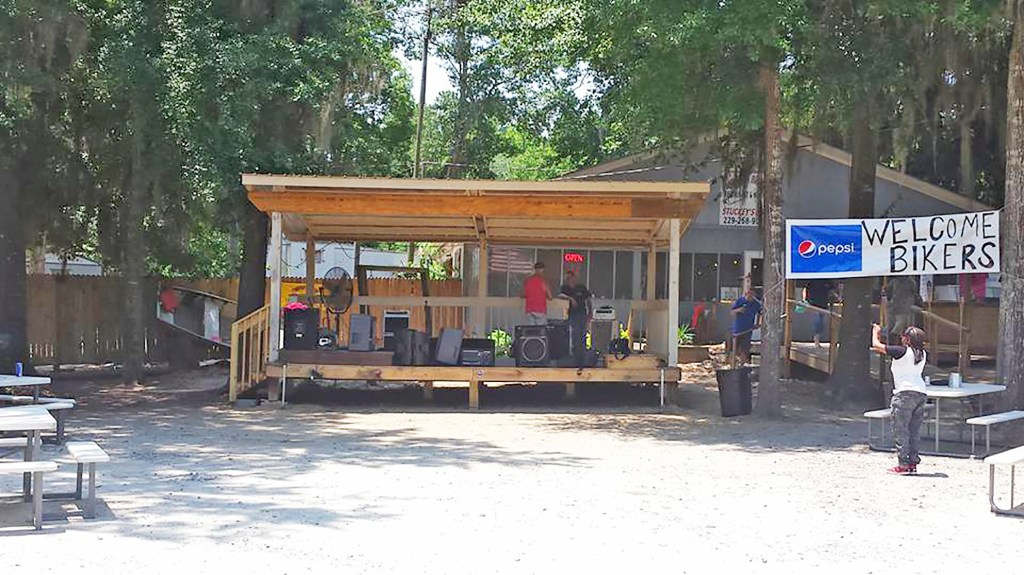 Photo Courtesy of facebook.com Noise from bands playing at Camper’s Haven has angered citizens in the area.

VIENNA — County Commissioners here upheld a violation issued by Zoning Administrator Gary Houston to Camper’s Haven Restaurant. The restaurant reportedly violated the county’s zoning ordinance that prohibits undue hazards, offensive and loud noise, vibration, smoke, glare, heavy truck traffic or late hours of operation in the county which includes the area of Camper’s Haven. Though eating and drinking establishments, such as the restaurant are allowed in the ordinance, those establishments are forbidden to have any dancing, floor shows, or live entertainment.

Lane Stuckey, operator of the Camper’s Haven Restaurant appealed the violation and a public hearing was held Thursday during the commission’s regular meeting where several citizens made their voices heard on the matter.

Several citizens complained of noise on Memorial Day weekend and other nights when Stuckey had a live band performing at the establishment. Some residents, having lived in the area 50 or more years said that the noise shook the windows of their homes.

Citizens described the noise as a “Boom Boom Boom” and accused Stuckey of turning the once peaceful area into a “honky tonk.”

Stuckey apologized for the music being so late at night but informed commissioners it did not go on every night.

“Folks like to drink, have fun, shoot pool and enjoy music,” said Stuckey. “When I first opened I attempted to go with a non-alcohol establishment but it was unsuccessful. I try to assist where I can. During the recent flooding I stayed open 24/7 and fed deputies and the fire department and took a collection for bleach. Cans collected go to the church for recycling so the money can be used for their youth group. I am just trying to make a living.”

Out of those citizens, two spoke in defense of the restaurant. One citizen who says he lives in closer proximity than some of the others and that both he and his wife have no problems sleeping at night. He said there had always been music and that at 70-years old he wanted to enjoy life too.

Max Rogers who owns the campground and lives on the property agreed with the gentleman.

Since the ordinance had been in place since 1998 commissioners upheld the violation. Stuckey can apply to have the property rezoned. He said he plans to make that his next step.”

Also on the agenda:

• Veronica Pate, whose daughter Shy-Shy was kidnapped in Unadilla 18 years ago said they will be sponsoring a Rock One Sock Searching for Shy Shy 5K run in September. They asked for the support of the commission in this venture they say will be held to raise awareness about child abduction and push for legislature requiring all children to be fingerprinted by the time they reach 3rd Grade. Commissioners advised Pate to come back before the board once more definitive plans are made for the event and they will assist. They also recommended she seek the guidance of the Dooly County Chamber of Commerce. The event will be held on Sept. 3 from 8 a.m. until 12 p.m., the day before the 18th anniversary of her child’s disappearance. Location and further details will be forthcoming.

• County Administrator Steve Sanders updated the board on the LMIG road resurfacing projects, the Box Culvert on Roberson Road and the Bridge on Weeks Road.

• Commissioners will hold the first reading of the county proposed personnel policy during their next meeting.