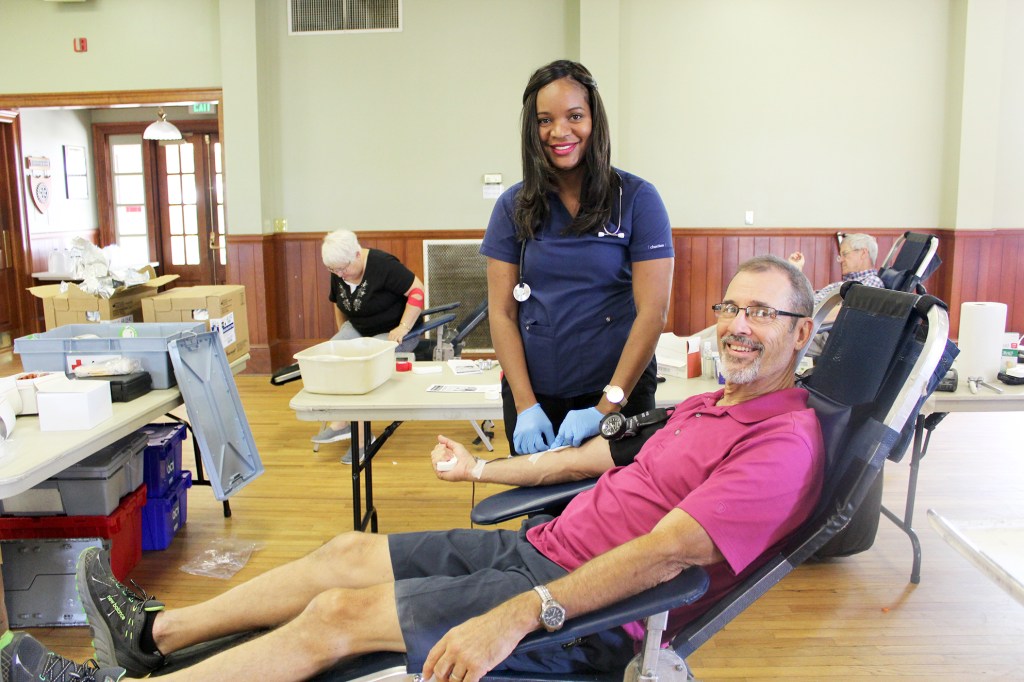 Becky Crissman/Cordele Dispatch Retired Postman, Jeff Workman, says he is happy to donate blood. It is his way of doing something to help someone in need. To date he has donated 11 gallons of blood. He is pictured with a member of the Red Cross preparing to donate at Tuesday’s blood drive at the Cordele Community Clubhouse.

CORDELE — A local man has spent over 40 years of his life donating blood in the hopes of giving others a second chance at life.

“I gave my first pint over 40 years ago when I was living in Florida,” said Jeff Workman a retired postman from Cordele. “I donate about every two months which is about six times each year.”

Workman was at Tuesday’s Red Cross Blood Drive held at the Cordele Community Clubhouse in honor of him. According to local Red Cross worker Jack Windham, Workman has donated over 11 gallons of blood since that first pint all those years ago. That is a total of 88 pints of blood.

“That is a pretty big accomplishment said Windham, “We are grateful for his continued donations and I am sure those that have received his blood are also grateful.”

“Donating blood is a good way to help others,” said Workman. “It is also easy, if you can donate. We are very fortunate to have the blood drives held right here in Cordele. It is convenient and it saves lives.”

Workman said now donors can fill out their questionnaire on-line and obtain a Rapid Pass on their phone to make the process move even faster.

When asked about amount of blood he has donated and the numbers of people that his gift of life could have saved Workman said, “I feel humbled when I think about it. That someone might have gotten a second chance to live just because someone took a few minutes out of their day to donate blood.

Workman said the Red Cross also sends out emails letting donors know where their blood went and how many people were helped by it.

During Tuesday’s blood drive a total of 36 donations were made, including Workman’s.