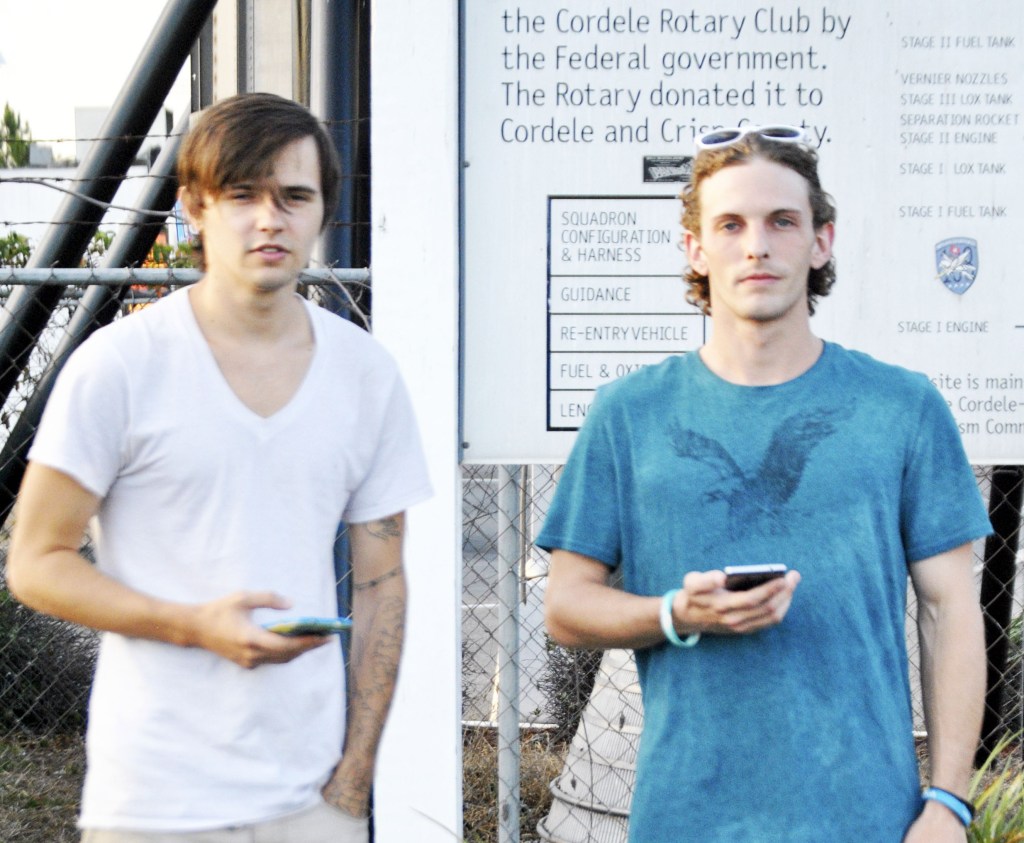 Becky Crissman/Cordele Dispatch Friends and fellow Pokemon Trainers J.T. Mansfield (left) and Mason Clark (right) check in at the Pokestop located at Cordele’s Titan Missile to stock up on some pokegear before heading out to track again.

CORDELE — If you have been traveling around Crisp and surrounding counties lately you might have noticed some slightly unusual behavior…. People, sometimes in groups, scurrying about with their cell phones in hand. Maybe you have noticed more traffic visiting Cordele’s Titan Missile or the Confederate Monument and the gazebo at the Community Clubhouse. Have you passed someone in Wal-Mart snapping pictures of something but you just don’t see anything? 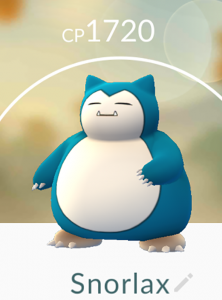 This photo, submitted by Mason Clark of his highest level Pokemon to date. The beast is a Snorlax with 1720 combat points which is sure to give any other Pokemon Trainer a hard time when battling in a gym.

Well don’t worry, you have just encountered a Pokemon Trainer.

A new interactive game, Pokemon Go, has taken the world by storm since it released in the Google Play store on Wednesday, July 6. Now with over 10 million downloads Pokemon Go has become an international phenomenon and people right here in the tri-county area are already on the Pokemon bandwagon.

Long-time friends and Pokemon Trainers Mason Clark and J.T. Mansfield were some of the first in Cordele to download the app the day it was released and are loving every minute of it.

“The object of the game is to search out and capture different species of Pokemon,” said Clark

“As you gain experience and the Pokemon you capture evolve and power up you can join up with one of three teams Team Valor (red), Team Mystic (blue) or Team Instinct (yellow). Once you join a team you battle for control of area Gyms.”

For those unfamiliar with the game a gym is controlled by a team and guarded by their top Pokemon. Other teams can enter the Gym, attempt to defeat them and take control of said Gym. Both Clark and Mansfield are members of Team Valor, who presently control most of the gyms in town and at one point controlled them all.

The unique thing about Pokemon Go is just as its name says, you must GO!!! You cannot just sit in front of your X-Box or Playstation and stick a game in, grab a control and play. To play Pokemon Go, you must track the Pokemon as you are physically moving.

“It’s great,” said Clark. “The game will show you what Pokemon are close by and you track them until they are visible on the screen, then you toss a Pokeball and catch them. Sometimes, if they are strong it will take more than one ball.”

Clark and Mansfield say they love to go out together or with a group of friends and try to track down Pokemon and of course when they run out of supplies they head to one of the many Pokestops in town or the surrounding counties to stock up on Pokeballs and others needed items to advance in the game. What, you may say, is a Pokestop?

“A Pokestop can be anything,” said Mansfield. “In many instances they are historic monuments within a city. For example in Cordele the Titan Missile and the Confederate Monument are Pokestops. There are several Pokestops at Veterans Park near the museum. In Vienna the Veterans Memorial and some other historic stops in front of the courthouse are all stops.”

The game will alert you when you are in the vicinity of a Pokestop or a gym.

In addition to the game being fun both Clark and Mansfield agree one of the best parts is meeting new people.

“People are out mingling and meeting people,” said Clark.

Mansfield agreed, “You can just be hanging at a Pokestop or a Gym and meet up with friends or meet new people. Everyone just enjoys sharing stories and comparing their strongest Pokemon.”

“It has brought people of all ages, races, cultures, and genders together,” said Clark. “And isn’t that exactly what we need right now with all the violence going on around us.”

Mansfield says he also loves the competitive feel and even though you will hear some good natured ribbing between teams everyone is pretty decent to each other.

Both Clark and Mansfield want to be sure fellow Pokemon Trainers remain safe in their quest and want everyone to think of safety first. The two compiled a few safety tips for trainers.

2. Travel in groups it is safer and more fun.

3. If driving to a Pokestop please have a designated driver. Please do not track and drive.

4. Parents/Grandparents drive your young ones around. They will have fun and it is a great way to bond.

5. Be respectful of area businesses when tracking and respect the property of others. Patron those businesses and they won’t mind you coming back.

6. When tracking at night where reflective clothing.

Just remember, if you see a Pokemon once, you will see it again. Don’t risk your safety. Just have a good time…..

“We want to wish all our fellow Pokemon Trainers out there happy tracking,” said Clark and Mansfield. “One final lesson to remember…. TEAM VALOR FOR LIFE.”