Blessed are the peacemakers, for they shall be called the sons of God. Matthew 5:9

CORDELE — They get up everyday and put on a uniform and a badge never knowing what that day might bring. They hug and kiss their spouses and their children, never knowing if it will be for the last time. They put themselves in harm’s way to keep the citizens of their communities safe from harm. They aren’t rich and famous and you won’t find them on any red carpet. They are our hometown heroes, our men and women of law enforcement, a position that deserves respect, but often gets little. 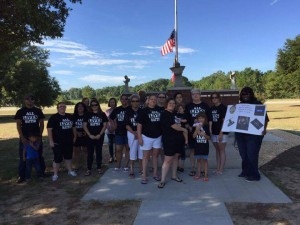 Submitted by Crisp County Sheriff’s Office
Area citizens show their support for law enforcement by wearing specially designed t-shirts stating “All Lives Matter.” The back of the shirts reads “We back the Blue.”

In the aftermath of the recent murders of law enforcement officers in Texas and Louisiana two prayer vigils were held in the community, to pay tribute to lives lost and show our local law enforcement that we “Back the Blue.”

The first prayer vigil was held Saturday morning at the Crisp County Sheriff’s Office Memorial Wall. Approximately 30 people attended the event, most wearing T-shirts bearing the words “All lives Matter” on the front and “We Back the Blue” on the back. It was a small, yet powerful way to show law enforcement their community supports them and appreciates their sacrifices.

“I want to thank everyone who came out and supported the blue with a prayer in front of the sheriff’s office,” said Sheriff Billy Hancock. “It is great to have the support of our community.”

Event coordinator, Amanda Masters and Reverend Damon Fountain spoke, offering words of encouragement to all men and women of service. The assembly then joined together for a moment of prayer.

Sunday evening a second prayer vigil was held outside of the Cordele City Hall. Sgt. Ketorie Sales, who coordinated the event opened with a moment of silence for those law enforcement officers around the country who recently lost their lives and afterwards shared a verse of scripture.

Donna Stripling, local lay speaker from Hand of Hope, along with Pastor Isaac Owens offered words of encouragement which was followed by addresses from City Commissioner Vesta Beal-Shephard and Sheriff Billy Hancock. Courtney Oliver introduced the final speaker, Drew Anderson, who closed the vigil with a prayer.