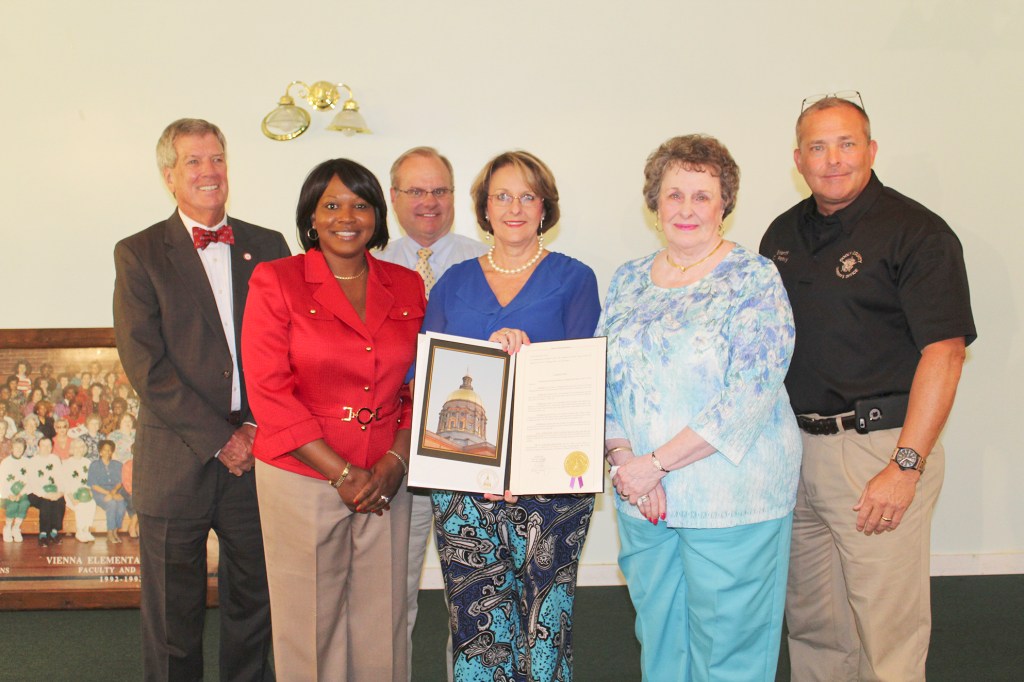 Becky Crissman/Cordele Dispatch (l-r)Judge Robert Chasteen, Rep Patty Bentley, Judge Rooney Bowen, Melanie Davis, Gwen Peavy and Sheriff Craig Peavy are pictured with the resolution presented to the family of the late Sheriff Van Peavy in honor of his over three decades of service to the citizens of Dooly County.

According to Bentley during the House’s most recent session they introduced 1,085 resolutions. Of that number 887 were adopted including a resolution honoring the life and service of Dooly County’s long-time sheriff, the late Van Peavy.

Sheriff Peavy passed away in January of 2015 after complications from surgery. He served Dooly County for over 30 years. The resolution was adopted to honor his decades of distinguished service.

“We thank God for his life and his legacy will live on through his family and the citizens of Dooly County,” said Bentley reading from the resolution.

“He was one of Dooly’s most distinguished citizens. He made himself available 24/7 and treated every employee like they were family. Peavy had an open door policy. He was firm but he was fair and full of wisdom. Sheriff Peavy touched many lives and will forever be missed by all who had the great pleasure of knowing him. The House of Representatives honors his life and memory.”

Bentley presented a beautiful copy of the resolution to Peavy’s family, his wife Gwen, daughter Melanie Davis and his son, Craig Peavy who is the proud successor of his father as the current sheriff of Dooly County.

“He certainly loved this community and he loved serving the people of Dooly County,” she said.

Chamber Committee Chair Larista Thompson said the resolution was “a fitting tribute to a wonderful man.”

Bentley said the House’s session lasted 40 days and ended in March. She said during that time 458 Bills were also introduced and 195 of those bills were passed and 188 were signed by Governor Nathan Deal and he vetoed 7.

Mike Roper gave the board an update on the Annual Big Pig Jig which will be held in Vienna the first weekend in November. Entertainment for this year’s event has already been booked. On Friday, November 4 Dwayne Dopsie and Zydeco Hellraiser Band will open for headliners The Kentucky Headhunters. On Saturday, November 5, following the awards ceremony Brandon Wheeler will open for Luke Martin.

New this year will be free entertainment on the stage during the day. The Saturday Free Entertainment Committee is chaired by Patricia Bush and the committee is hoping to finalize that lineup in the coming weeks.

MBN has released some new rules and regulations for the Big Pig Jig for 2016. It is hopeful that the new rules will help pick up some new teams for the event.

They have also discussed offering several VIP packages to entice more visitors to come and participate including a “Cook Team for a Day package where some lucky visitors will get the opportunity to see, firsthand, what it is like to be part of a Big Pig Jig Cooking Team. There are talks about VIP passes to give those holders some special privileges while inside Pig Jig Village.

The Big Pig Jig is steady gaining national notoriety. USA Today nominated 20 contests from around the country as the Best of the Best USA Today Top 10 Best Reader’s Choice Award. The BPJ made the list at #9. Chamber President Rhonda Lamb-Heath informed that most of the events on that list were national events and the BPJ is a state event. The BPJ was also selected by Delish.com in New York as one of the 50 best Cooking Competitions in the United States.

Other reports were also given during the chamber meeting including; Organizational Development, Community Development, Government Affairs, and Tourism Opportunities.

Heath also provided a written report highlighting the activities of the chamber staff.