STAR instructors helping get kids on the right path 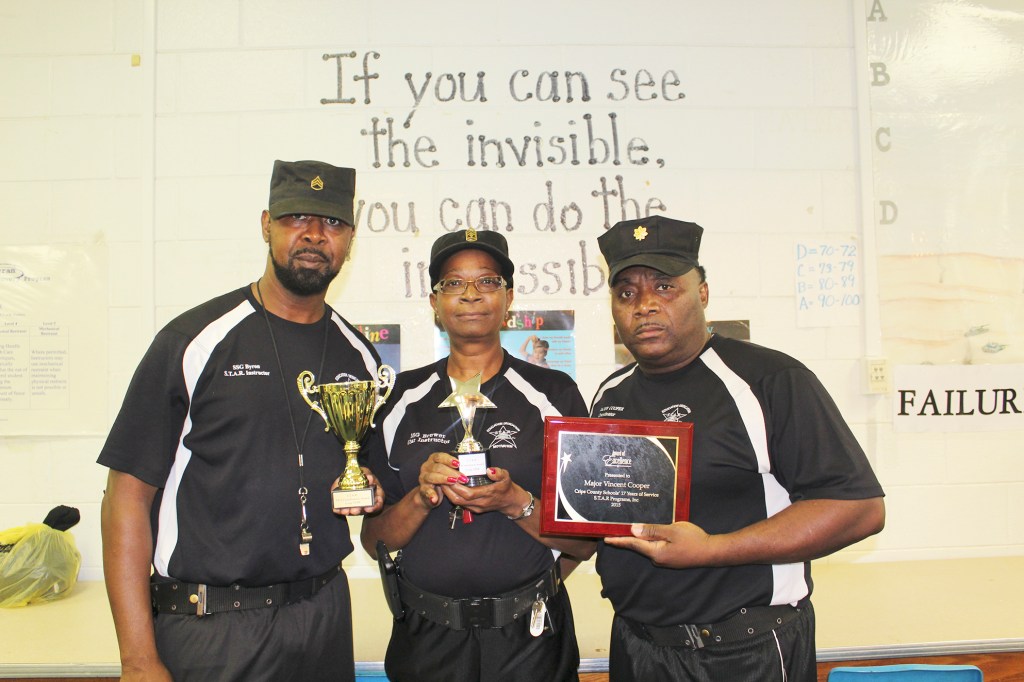 Cooper was promoted by the STAR Program to Major back in July. He also received the 2016 STAR Coordinator of the Year Award. Brewer was the recipient of the 2016 STAR Achievement Award.

STAR was first implemented in Crisp County in 1998. Cooper, a juvenile officer at an Ocilla Boot Camp, came here to serve as the program’s coordinator and has done so for the past 18 years. Brewer has been a part of the staff for the 14 years and Byron joined the team just 6 years ago.

The program, which originated in Texas in 1993 is geared toward addressing the needs of problem children/teens in a proactive manner. The abiding philosophy of STAR is that working with young people while they are impressionable ensures a greater possibility for success in their lives and in the program.

“The earlier you capitalize on a child’s need, they will follow and they will do better,” said Cooper. “One of our most critical jobs is finding the problem area.”

The program primarily addresses the needs of students who have committed offenses that warrant suspension from school or detention in a juvenile facility. Entering STAR allows the students to continue their education while remaining in their home community.

According to Cooper, students can be referred for any number of reasons and there are varying levels of the program based on those reasons.

STAR Lite: For students 5-8 years old who are referred to the program by parents and school officials for continuous unruly behavior.

STAR I: A one-day prevention which students are referred by parents and school officials for continuous unruly behavior in lieu of Out of School or In School Suspension.

STAR III: Is a 24-week component which students are ordered by the court to attend as an alternative to incarceration for detainable, severe offenses.

“Relationships are a key factor for the success of the program,” said Cooper. “Not only with the kids and staff but the parents, board of education, and school administration as well. We also work hand in hand with the Department of Family and Children Services (DFACS) and Middle Flint who also refer students to the program.”

STAR is designed to help students;

• Improve their grade point average by at least one letter grade.

• Reduce the incidence of parent-child conflict at home.

• Improve the parents’ capability to fill their roll.

• Decrease the incidence of juvenile crime in the community.

STAR students are picked up by parents at 5:45 p.m.

Though students are referred to STAR mostly as a last resort, Cooper said they served a total of 211 students in Crisp County last year.

“Many of these kids have things they are dealing with so having compassion is very important,” he said. “Some of them are just babies. A lot of them are in survival mode and some just need building up and help with their self esteem.”

Brewer echoed Cooper’s thoughts and also said as instructors for the program they appreciate the support they receive.

“We really want to thank the parents and schools for their support of the STAR program,” she said. “We really appreciate it and we hope to continue assisting the young people of Crisp County for years to come.”

Brewer said she is looking forward to a great year working with the parents, students, teachers and administrative staff as well as other community agencies that make the program a success.

“STAR is not just about punishing kids,” said Cooper. “It is about REACHING KIDS. These kids have needs and we try to help meet those needs so they can succeed.”

Byron, who is a man of few words, was born and raised in Cordele and being part of STAR program and helping kids who grew up in the same community as he did is very important. Byron still holds the record (6ft 9 in) for the high jump in Crisp County.

A former STAR student, now a coach at Crisp County Middle School stopped by the STAR office. When asked, Johntavious King, now 21-years old said that the program helped him do a “complete 360” on his life.

“It was a major turnaround for me,” said King. “I was in the 4th grade. Now I get a chance to give back and mentor to kids who are a lot like I was.