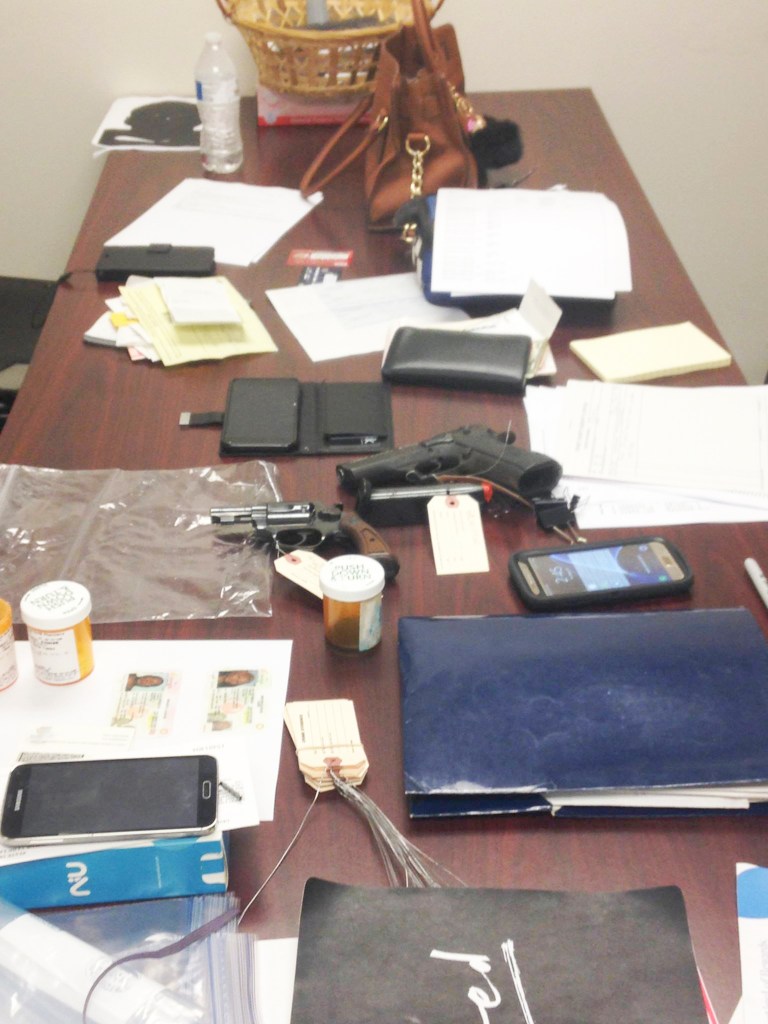 Submitted Items seized during recent traffic stop on I-75.

CORDELE — Law breakers beware…. Do not ride through Crisp County. Another traffic stop on I-75 led to the arrests of three Atlanta residents on multiple charges.

According to reports from the Crisp County Sheriff’s Office on Friday, August 12, 2016, Deputy John Roger Harvey stopped a white 2015 Nissan Sentra for traveling 87 mph in a 70 mph zone.

Upon making contact with the driver of the vehicle Dep Harvey detected an odor of suspected marijuana coming from the vehicle. Occupants of the vehicle gave conflicting information, which resulted in a search of the vehicle. During the search two firearms were recovered. One of those weapons was a UZI Eagle 40 caliber reported stolen out of Clayton County, Georgia, the other was a Rossi 38 caliber special.

Also located throughout the vehicle were various items commonly used in identity fraud such as checkbooks, listed names and social security numbers, fake identification cards with various names and license numbers as well as bank balances for multiple accounts. Arrested and charged was the driver, 66-year old Robert Martin. He is charged with speeding, obstruction of an officer and theft by receiving stolen property. Thirty-year old Crystal Gilliam was a passenger in the vehicle and is charged with obstruction of an officer. Twenty-six year old, Darius Martin is charged with giving false information and statements to officers, 14 counts of identity fraud, 2 counts of financial transaction fraud and possession of a firearm by a convicted felon. All three are residents of Atlanta, Georgia.

Sheriff Hancock applauds the efforts of his officers and their thorough roadside investigation. During the last two weeks, deputies have taken 8 illegal weapons off the highway.