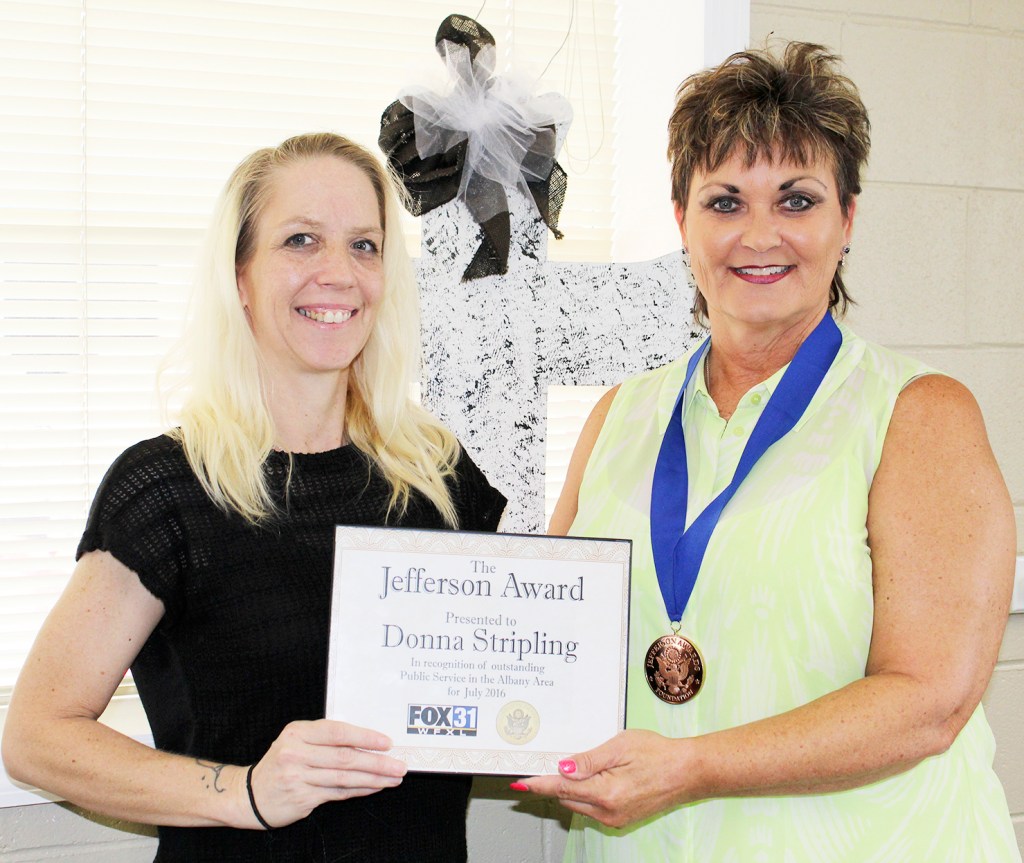 CORDELE — Donna Stripling, licensed evangelist and founder of Hand of Hope was recently named the July recipient of the Jefferson Award by Fox 31.

The Jefferson Award is the nation’s longest standing and most prestigious organization dedicated to celebrating public service, according to Fox.

“I was tickled,” said Stripling. “I get to do what I love and get an award for it, but I do not do this alone. I accept this honor on behalf of all the staff here at Hand of Hope. This is a Jesus thing, and everybody here earned this.”

Stripling is the founder of Hand of Hope in Cordele. Hand of Hope is a non-profit organization whose mission is taken straight from God’s word. “Truly, I say to you, whatever you did for the least of these brothers of mine, you did for me. Matthew 25:40.”

The ministry also provides spiritual guidance and teaching of the word on Monday through Friday from 12 p.m until 1 p.m. Hand of Hope also has a showering facility for those in need. The most recent outreach of the ministry is the on site micro houses which are available to provide shelter for those who need rest.

“The micro houses have a bed, lamp and chair. They are air-conditioned,” said Stripling. “They are for those that need a safe place to rest. They are also there for those that want to spend some time with the Lord; praying or reading the Bible. We started out with one micro house, but people have really come together and helped add two more. Our goal is five houses because that is the number of grace in the Bible.”

Stripling said since the Hand of Hope was first established that so many people have come together building the micro houses, helping in the garden, folding clothes, making donations.

Stripling was nominated for the honor by friend and former employee of Carter Burgers, Jody Kerr.

“I cannot think of anyone who deserves this more,” said Kerr. “She does not like for people to brag about her, but I want the world to know what an angel she is.”

Kerr said she heard about the award on television.

“They were asking for citizens to nominate a local, unsung hero who had impacted their community,” she said. “Immediately I thought of Mrs. Donna. I went on-line and filled out the application, and answered the essay questions.”

In Kerr’s application she described Stripling as a person with a real heart for people, who would give you the shirt off her back if you needed it and shares the Word of God with others.

When asked about obstacles Stripling has overcome Kerr said, “She hasn’t always been on fire for the Lord. She used to be in the world, but then she was touched by Jesus and has devoted so much of herself to sharing God’s word with others and doing the Lord’s work.”

Kerr said she was also asked how Stripling had impacted her own life. Kerr describes Stripling as being like a spiritual mother to her.

“She taught me about the Lord,” she said. “She showed me unconditional love like no one ever has before. She never gave up on me. I was a wayward child, but no more.”

When Kerr received the call that Stripling had been selected to receive the honor she said she was so excited she sent her a text at 1 a.m.

Stripling will be attending a banquet for honorees in February 2017. If announced as the state winner she will move on to Washington. National winners include celebrities such as Whoopi Goldberg and Michael Douglas.

“It would be nice to be chosen to receive the national honor,” said Stripling. “How wonderful it would be to have the opportunity to share the Word of God from the nation’s capitol. I appreciate the nomination from Jody and look forward to seeing what our Lord has in store for the future.”