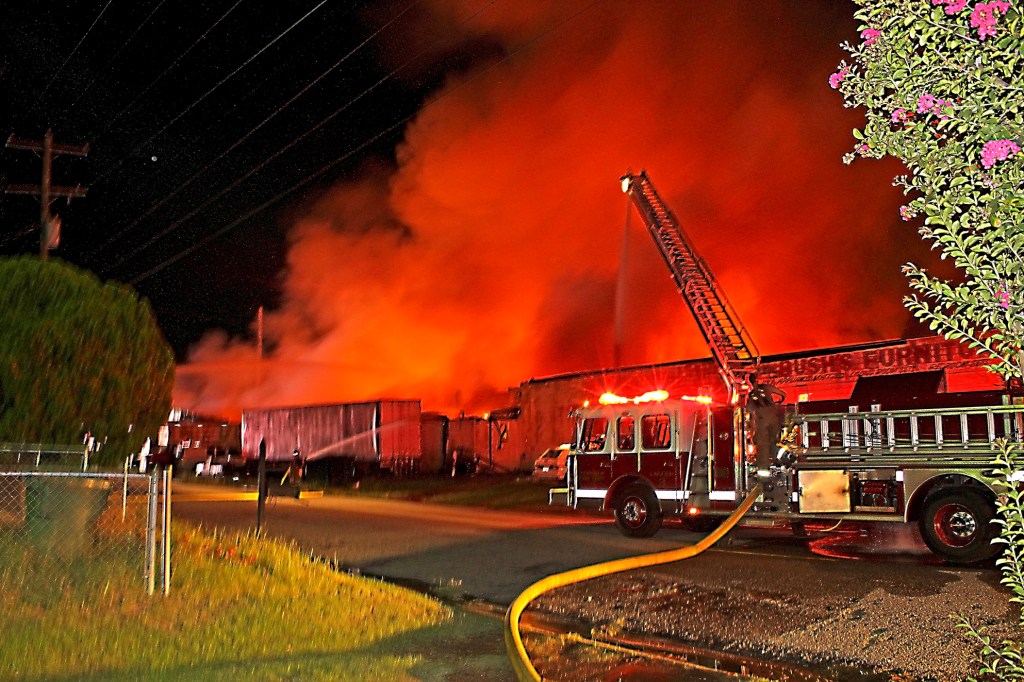 Becky Crissman/Cordele Dispatch Flames and smoke can be seen coming from the top of Bush's Wholesale Furniture as firefighters work to contain the blaze.

CORDELE — The cause of Friday’s late night fire at Bush’s Wholesale Furniture is under investigation according Glenn Allen, a representative from the State Fire Marshal’s Office. It has been confirmed the fire began on the exterior of the building causing around $3 million dollars in damages to the building and its contents.

“There were mattresses stacked outside of the east side of the building,” said Cordele Fire Chief Augustus Telfair. “They were not contained in anything. Someone, whether it was intentional or not, set them on fire.”

Telfair said firefighters arrived at the scene at approximately 2 a.m. and the building was fully involved. CFD brought in three pumpers, one ladder unit and had one reserve pump on standby. With about 14 firefighters battling the blaze, it took around 5-6 hours to get the fire under control. Firefighters spent a total of 12 hours at the scene, returning throughout Saturday to handle four hot spots.

Officers with the Cordele Police Department handled traffic control for the area and Crisp County EMS was on the scene to offer assistance to firefighters. Telfair said the pastor from Third Street Baptist Church also opened up the church’s social hall for firefighters to cool off, recuperate, and have access to restroom facilities.

“I think firefighters did a great job getting the fire out,” said Telfair. “The store’s sprinkler system provided some help, however there were trucks and trailers that were parked outside that posed a hindrance to firefighters.”

Candy Morey, owner of Bush’s Wholesale Furniture said she was blown away by the efforts of firefighters.

“They worked all night and into the next day,” she said. “They have come back multiple times. There are no words to convey just how much we appreciate all they did. We are thankful they were there.”

Morey said the support they have received from employees and customers, has also been overwhelming. She said she is appreciative of the calls, prayers and support.

The investigation has been turned over to the Fire Marshal’s Office and the ATF. Telfair said the preliminary investigation did not uncover any use of accelerant. The Cordele Police Department interviewed residents that live in the area but there have been no solid leads as of yet. Allen said that the investigation is ongoing.

Anyone with any information is urged to contact the Georgia Arson Hotline at 1-800-282-5804. Informants could receive up to a $10,000 reward for information leading to arrest and conviction.