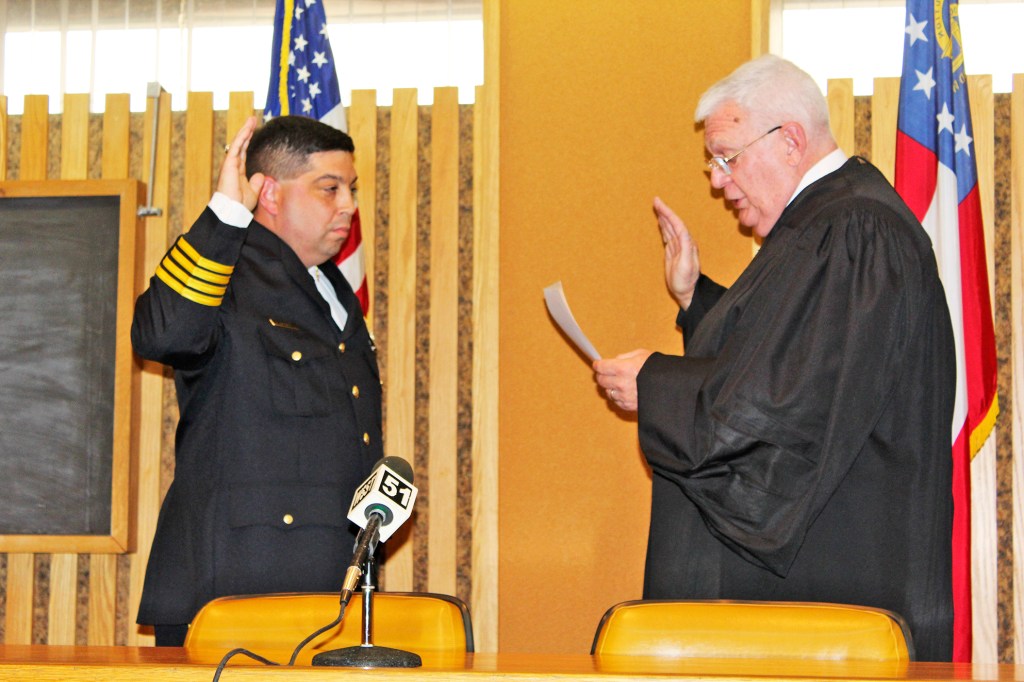 CORDELE — After an over year-long search the city’s new police chief was sworn into office Thursday afternoon.

Judge Melton Culpepper of the Cordele Municipal Court administered the oath of office to Chief Robert Rodriguez in the courtroom at city hall during a special ceremony.

“This is one of the pleasant parts of my job,” said Judge Culpepper. “I don’t normally get to see too many smiling faces.”

A husband and father of two, Rodriquez comes to Cordele from the Moultrie Police Department where he was serving as Deputy Chief of Police.

He is a Georgia Certified law enforcement professional with over 20 years of progressive and result-focused experience. While in Moultrie he served in capacities ranging from uniform patrol to Deputy Chief.

Rodriguez holds a Bachelor of Science Degree in Criminal Justice from Wilmington University and a Masters of Public Safety Administration from Columbus State University. He has also completed the Georgia Chief’s Executive Training along with more than 2,600 hours of advanced law enforcement training.

“I am very excited to be here,” said Chief Rodriguez. “Law enforcement is an extension of the community. We are Cordele. We are one family with one mission. It is important that we integrate ourselves into the community. Citizens need to know their chief and their officers. If anyone has any questions or concerns my door is always open. I look forward to working with the City of Cordele.”

Following the swearing ceremony citizens and community leaders were able to meet Rodriguez and his family who was present for the event.