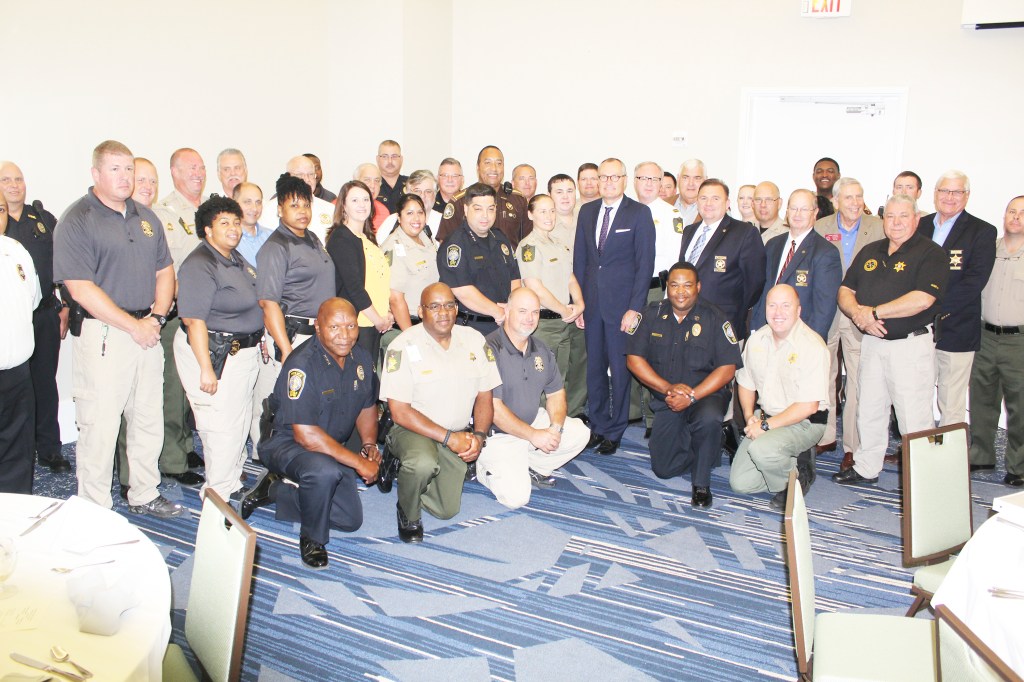 Becky Crissman/Cordele Dispatch Lt. Governor Casey Cagle visited Cordele Friday and showed his appreciation for local law enforcement. He is pictured with law enforcement and first responders from around the area as well as other state officials.

CORDELE — The 15th Anniversary of the 9-11 attacks is tomorrow. Even though it has been a decade and a half since that horrific day, we still remember. Thousands of innocent lives were lost that day, both civilian and first responders. 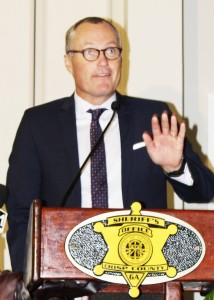 A Public Safety Appreciation Luncheon was held at the Retreat at Lake Blackshear to not only remember those lost on that day and the countless families changed forever, but to honor our men and women that serve us every single day, putting their lives in jeopardy so we can sleep in peace at night. Lt. Governor Casey Cagle attended the event and served as guest speaker.

Crisp County Sheriff Billy Hancock gave a welcome to those in attendance, numbering over 100 first responders from around the state.

“We do what we do to the best of our abilities,” said Hancock. “We are here today to remember those who have made the ultimate sacrifice and to honor those that serve everyday.”

Peach County Sheriff Terry Deese addressed the assembly which was followed by an invocation given by Austin Childs. Following a BBQ buffet-style luncheon Hancock returned to the podium to introduce the Lt. Governor.

“I am pleased to have so many first responders from so many agencies,” he said. “We have police chiefs eating with sheriffs and so on. We have all worked together. We can’t do what we do without someone looking out for us. Casey Cagle likes and loves law enforcement with all he has. He is a seventh generation Georgian which means he is invested in Georgia. He has lived his life here, raised his family here.”

“I want to express my appreciation of all area law enforcement and first responders,” said Cagle. “We all remember 9-11 and how it impacted our lives. Many of us recall where we were on that day, remember how we felt. Things come along that shake us up and make us who we are. It is those tragic times that force us to focus on what is important.

In my time as Lt. Governor, I have had the opportunity to travel our state and meet members of 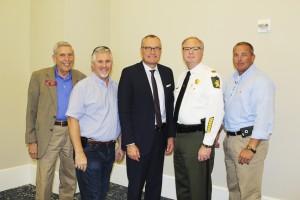 our armed services and law enforcement officers who wear our flag proudly each and every day. Through these experiences, I have gained a better understanding of the challenges these brave men and women face everyday.

It has been difficult over the past few weeks to turn on the television without seeing the fallout from a particular NFL Star’s refusal to stand during our National Anthem. While I understand this is his Constitutional right, one man’s actions do not reflect the attitude of a grateful nation.

Many people in the entertainment world like to equate the NFL season to a 16-plus week war, where the soldiers involved sacrifice their minds and bodies to play a game. I have no doubt that this particular NFL star prepares like any other quarterback, working on his footwork to avoid the linebacker that might blindside him after a missed block. Much like this preparation, our law enforcement officers and first responders spend hours on end improving their skills for different scenarios; but in the real world their foe is something much more sinister.  When you are blindsided there is no yardage lost there is life, game over.

Thank you for your commitment, God Bless you all.”