Cordele got a new Police Chief and the Dispatch recently sat down with him to discuss issues. Chief Rob Rodriguez comes to Cordele from the Moultrie Police Department were he served as an Asst. Chief of Police. Chief Rodriguez is married to the former Melanie Stephens of Albany and they have four children John who is away in college, Megan and Olivia are in high school and Andrew is in elementary school. The Chief began his career in Law Enforcement in Pelham, Ga. and after a short stint there moved over to Albany for about 15 years. He left to go to Moultrie in 2009 and stayed there till coming here September 1st.

In his career the Chief has held numerous different jobs and completed countless in service training hours along with a Master Degree in criminal Justice from Columbus State College. His studies are vast including sex crimes and murder to white collar crime and administration and budgeting. Rodriguez looks to improve and strengthen community involvement in crime prevention. It is his hope to put on classes and seminars to the local businesses, to teach them security and give them guidance in making Cordele safer.

The Chief says that he feels really good about the level of cooperation he is getting from the Sheriff’s Office in helping each other in making Cordele and Crisp County safer. He also a stated

that three new officers were hired 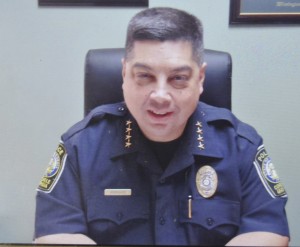 Monday and that he anticipates another 4 or 5 in the near future. He said that these officers were mostly all hired to the uniform patrol division. In summation the Chief is “ extremely excited to be here in Cordele and he looks forward to making Cordele the safest town in Georgia.

The Cordele Dispatch would like to ask all the citizens of Cordele and Crisp County to join us in welcoming our new Chief of Police.