According to Sheriff Billy Hancock, on Wednesday, September 27, 2016 at approximately 7:30 pm, Sgt. Ben Sumner stopped the driver of a grey 2013 dodge charger for a traffic violation on Ga 401. Sumner approached the driver of the vehicle and questioned him about his speed and ownership of the vehicle. The driver, 21 year old Andre Bradley told Sgt. Sumner that he didn’t know who had rented the vehicle and that he was just the driver. Sumner then went to the passenger side of the vehicle to question the passenger about the rental agreement. While talking with the passenger, Sumner smelled an odor of marijuana coming from the vehicle.  The driver and passenger gave conflicting stories. The backseat passenger was asleep. Deputy John Roger Harvey arrived at the scene to assist Sumner. All occupants were requested to exit the vehicle. While conducting a search of the vehicle, Sumner located marijuana inside the vehicle. All three occupants denied knowledge or ownership of the marijuana. Officers were in the process of taking the suspects into custody, at which time all fled the scene on foot. Two of the suspects returned and tried to enter the vehicle. After the two suspects were unsuccessful at regaining control of the vehicle, they fled the area on foot. Multiple back up units responded to the area and began to search for the suspects. The backseat passenger was apprehended by Sheriff Hancock and Cordele Police officer, Diaz. The twenty year old, Demarcus Thompson was found lying in a ditch along side of I-75. The other two offenders, twenty one year old Ricquone Ouffutt and twenty year old Andre Bradley were located at a local hotel and taken into custody. Further investigation revealed multiple items used for fraudulent activity, including debit cards and a label maker. Also found in the vehicle was illegal narcotics. Each offender is charged with seventy one felony counts of Forgery of Financial Transaction Cards, Criminal possession of Financial Transaction Card Forgery Device, Possession of controlled substance, Possession of marijuana and Obstruction of an officer. In addition, the driver, Bradley was also charged with speeding and the front seat passenger, Ouffutt was wanted out of Hillsborough County, Florida. None of the occupants could produce a rental agreement for the vehicle and stated that they had not rented the vehicle. All are detained in the Crisp County Detention Center. Sheriff Hancock would like to extend his appreciation to the Cordele Police Department and the Georgia State Patrol Aviation Unit for assisting in the apprehension of these criminals. Again, tips from local citizens assisted in the apprehension of the two offenders at the local hotel. 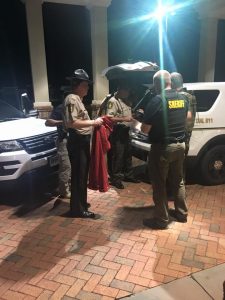