The cause of the fire is not confirmed, but is thought to have ignited from the hauling truck’s brakes or tires.

Firefighters worked the scene for eight hours before having it fully contained.

The fire burned about a one mile stretch of grass in the median and side of  Hwy. 300.

The forestry department intervened to plow fire breaks when the fire moved into a cotton field.  Minor damage to the field was reported.

Chief Windham stated that the hay bales have since burned out. 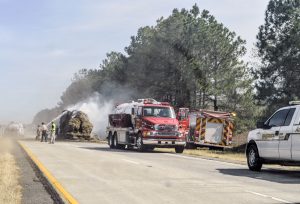