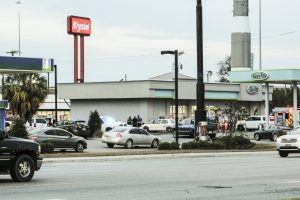 All law enforcement officers go into the job knowing that they may very well face a moment of pure stark terror. If not for an apparent error in the loading of a firearm by suspect David Carter, we would be facing another officer fatality in the State of Georgia in the last two days. This time the officer would have been an on-duty deputy in Crisp County.

At approximately 5:07 p.m., the call came out from the Gas and Go on East 16th Avenue that the officer needed assistance. Cordele Police department officers and Crisp County Sheriff’s Deputy’s responded. Upon arriving, it was determined that Carter, who had recently been released from the Crisp County Jail, pulled his weapon and attempted to discharge it in the face of Deputy Lucky Taylor. Deputy Taylor entered the Gas and Go to purchase a drink, when he saw Carter in the store with a gun on his side. When Taylor asked about the side arm, the suspect quickly drew and pointed it into his face. Deputy Taylor responded by drawing his Taser and discharging it into Carter. As the struggle ensued, Taylor called out for help from his colleagues, and persons in the store also assisted. Sheriff Hancock said, “ This incident is in the jurisdiction of the city and that he and his officers are here to assist the Cordele PD.” Chief Rob Rodriquez of the Cordele PD said, “We are going to evaluate the stores taped footage along with all the other evidence and determined the correct charges.” Our initial investigation reveals that the suspect did attempt to commit serious bodily harm or death on Deputy Taylor,” the Chief further lamented. The Dispatch will be following this story as it develops.