Faced with worsening drought conditions in about three-fourths of the state, along with water supply concerns in some areas, the Georgia Environmental Protection Division (EPD) has declared it will raise the state’s drought response to Level 2 in 52 counties and impose a Level 1 Drought Response in an additional 58 counties.

“Today’s declaration is driven by an extended period of little or no rain and increasing dryness in the impacted areas,” said EPD Director Richard Dunn. “What’s more, there is little hope for relief as weather forecasters expect an unusually warm, dry winter across most of the state.”

This week marks the 24th week of continuous severe drought in northwest Georgia, the 22nd week for the Atlanta metro area, the 21st week in northeastern parts of the state and the 15th week in central Georgia. In addition there is a decline in soil moisture and some streams are flowing at or below record lows set during droughts in 2007 and 2011.

• Washing hard surfaces such as streets and sidewalks.

• Water for ornamental purposes, such as fountains.

• The use of fire hydrants, except for firefighting and public safety.

Haralson County and the cities of Griffin, Tallapoosa, Waco and Buchanan have reported water supply issues and have been granted EPD variances to impose water use restrictions greater than state requirements.

A Level 1 Drought Response requires that public water systems implement a public information campaign that includes, at a minimum, public notice regarding drought conditions and drought-specific public service messages in one or more of the following ways: newspaper advertisements, bill inserts, website homepage, social media, and notices in public libraries.

The following activities are allowed under both Level 1 and Level 2 Drought Responses:

• Irrigation of personal food gardens may be done at any time of day.

• Irrigation of new and replanted plant, seed, or turf may be done at any time of day for 30 days after installation. 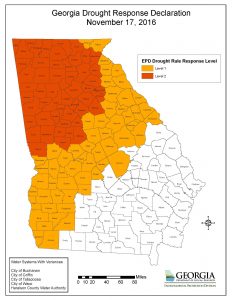