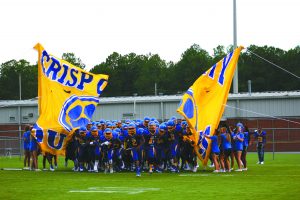 Comes to an Unexpected End

CORDELE – At times like this trying to figure out what the right thing to say is sometimes very hard to do.

Last Friday night, the amazing 2016 Crisp County Cougars put on a show and advanced for only the third time in school history to the State semi-finals.

This week the Cougars hosted what can only be described as Juggernaut – an unstoppable force of football.

Yes, the Cougars shot themselves in the foot many times and the officials threw a lot of flags on us (many deserved). Yes, we put ourselves in the hole early and couldn’t climb out. However, make no mistake about it, the Cedar Grove Saints were older, bigger, and could jump higher than we could.

These are the facts, and they are not disputable.

Last night, Crisp County learned a lesson. You see, we are a very young team and the future is very bright.

We are going to miss our seniors when they graduate. They led us back into a new era of football that we haven’t seen here in 20 years and to that end, all of Crisp County says THANK YOU!

Yes, the taste of defeat after going 13-0 will never be sweet, but like the Phoenix rising up from the ashes, so shall the Cougars.

With lessons learned from the 2016 campaign, look for Crisp to again be in the hunt next year and the year after that as well.

To the kids staying and playing on, just remember to never ever, ever, ever quit.

To our Coaches – guys you did an awesome job with the youth of this community and for that the people of Crisp County say THANK YOU!

Coach Felton, you are a class act and the boys are going to be better men because of it – keep it up!

So folks, the best season in the history of Crisp County football (13-1) comes to a regrettable end, but it has been a December to remember and all of Crisp County has certainly enjoyed the ride.

The Saints established eight scoring drives of 37, 61, 35,46, 24, 26, 89, and 78 yards along with two safeties in the game. The Cougars offense was woefully over matched and wrought with mistakes.

One thing is for certain – for the last four months there sure has been a lot of happy people in Crisp County.

Winning is fun and contagious and see you next year!