A&D Tires – All That Remains

An early morning blaze in Cordele on Saturday, 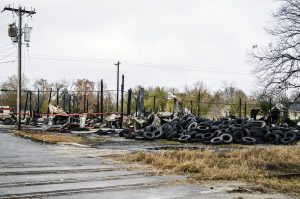 December 17, completely destroyed A&D Tires located on 6th Street across from the Courthouse.

According to City Fire Chief Augustus Telfair, the fire department received notification at 2:29 a.m. and by 2:32 a.m., firefighters were on the scene, where they remained for several hours extinguishing the fire and keeping it from spreading to nearby structures.  Firefighers were cleared to      depart at 11:16 a.m.  Thought to be of an electrical nature, the cause of the fire remains “Undetermined” and is under investigation by the State Fire Marshall.