The Right Time, The Right Place!

On Thursday, December 22, Russell and Paige Taunton’s day started as usual.  Both went to work, and later they had plans for the evening to attend a Tacky Christmas Sweater Party.  Paige stated that a series of events caused them to run late in getting to the party.  One being that Trooper Taunton is a volunteer for Toys For Tots, and they were dropping off toys.

“We almost decided not to go to the party,” said Paige, “Now I’m glad we went on.”

Enroute to what they thought would be a fun  holiday evening, the Tauntons came upon a terrifying two-car wreck.

“Jesus, take the wheel!” Those were the words that Paige Taunton had uttered when she and her husband, Georgia State Patrol Trooper Corporal Russell Taunton, exited their vehicle to take quick action.

At first, they both thought that only one vehicle was involved.  The car was upside down and the occupant was trapped inside.  Officer Taunton used a crow bar to smash a window and the man was able to crawl out on his own.  Next thing he knew, Paige was screaming that there was another vehicle, also upside down, and it was on fire.  Turns out that the occupant was unconscious.  Officer Taunton used the crow bar to smash the window and together, he and his wife were able to pull out the driver just seconds before the car became fully engulfed in flames.

Shortly afterwards, the Dooly County EMS were on the scene to assist.

Paige Taunton said that some of firefighters were already at the Christmas party and she remembered seeing those tacky Christmas sweaters at the scene taking care of business.

“I am so very proud of my husband and Dooly County EMS,” exclaimed Paige.  “They all reacted so quickly and efficiently and a life was saved.”

Paige Taunton was no slouch herself as she helped to pull driver Jerry Sutton from the burning vehicle and being a former nurse, tended to him while awaiting emergency services.

Known details of the wreck are that both drivers were traveling North on Hwy. 41, when Jerry Sutton, age 57,  hit John Daniels, age 72, from behind causing both vehicles to overturn.  Mr. Sutton landed on the opposite side of the road in a yard before it caught fire.  Mr. Daniels also landed on the same side of the road.  No further details were available about the condition of the drivers at press time, and the wreck is still under investigation.

Three years ago, Paige Cape Taunton left the nursing field after her father suffered a bad motorcycle accident, so that she could assist her parents with their agency, Cape Insurance Services, LLC, where she is employed as an insurance agent.  She truly believes that God placed them there at that very moment and knew they were meant to go to the party.  Did they go?  Yes!  After all was said and done and still not deterred, Russell and Paige joined in the holiday festivities. 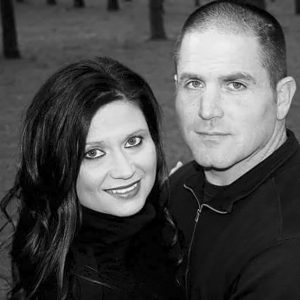