The above photo was released after press time and not available for “The Right Time! The Right Place!” story in Wednesday’s edition.  The car, which was already on fire, burst into flames just seconds after GSP Officer Russell Taunton and his wife, Paige, rescued the unconscious driver, Jerry Sutton of Pinehurst.

The photo was sent to Georgia State Patrol Commander of Post 30, Jon Posey, wherein he has released this statement concerning the heroic efforts of Cpl. Taunton and his wife, Paige:

“The actions of Cpl. Russell Taunton and his wife Paige last Thursday night at a crash scene were both compassionate and selfless.  For those that know Russell and Paige, this is no surprise, this is who they are.  Whether it is pulling occupants from a crashed vehicle, helping to raise and give toys to children every Christmas, or helping individuals in their community throughout the year.  They are servants and expect nothing in return.  Russell and Paige are good Christian people that are always serving their community and they consistently set an example for all of us to strive to follow.” 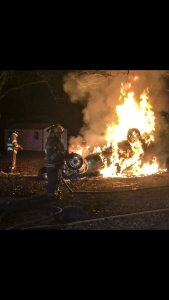