Around 11:45 a.m. today, a call went out to City of Cordele Fire Department that a mobile home, located at 303 ½ West 29th Avenue in Cordele, was on fire. The resident, Claudia Clark, and her grandson were at home when the fire began. Ms. Clark told the Cordele Dispatch that she was in her bedroom and smelled smoke. Upon entering into her kitchen, she saw flames, picked up her grandchild, and exited the home. No injuries were reported. A Crisp County Sheriff’s Deputy was able to retrieve and secure Ms. Clark’s dog. It is unknown if the home occupied by Ms. Clark is a total loss or not. 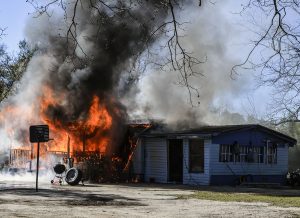