Keene And Reid Appointed To Chairs

Annual Appointments were as follows:

Guests with public comments were as follows:

Jo Pittman, 599 Kildeer Road, presented problems with the road.  She stated the Road Department has done a lot of work on the road and it is much better.  However, she has measured the road, and it is only eighteen feet wide.  A full-size truck is eight feet wide, so if two trucks were to meet, one of them would have to back up.

These were the paving projects that were being done.  The LMIG fund is for resurfacing roads that are paved and are in need of repair.  The Commission does have a say in these projects.  The SAP is for striping and signage on county roads.  The final available funding is through a CDBG grant which requires an area be heavily populated and low income in order to be funded.  The funding cannot be mixed and has to be spent as required.  County Road Superintendent Adam Dowdy is going to be asked to look at the area and see if there is any way he can help the situation.

In other news, EMS Director Charles Futch stated they had 1,540 calls for the year, and Probate/Magistrate Judge Shawn Rhodes stated this was the biggest year of warrants ever.  Firearm permits were up for the year.

EMA Director Larry Brown stated the storm on Monday night was rough.  There were some issues but nothing that can’t be handled.  Sheriff Robert Rodgers stated the power went off at the AG building and they lost radio signals.  The generator issue will be looked at so this situation will not occur again.  He added they are going to keep Probate busy this year.  He thought their radar permit had expired, but it is up to date until 2018.  He has told a couple of his deputies to begin working traffic.  He asked all Commissioners to come to the Jail after the meeting and see the conditions of the Jail.

Commissioner Huck Greene made a motion to name the Cordele Dispatch as the County Legal Organ.  Commissioner Jowan Johnson seconded the motion that carried unanimously.

Commissioner Jowan Johnson made a motion to name all Wilcox County Banks as possible Financial Institutions for the county.  Commissioner Alfonza Hall seconded the motion that carried unanimously.

The only item of new business was a resolution to apply for a CDBG grant for Falcon Circle.  The engineers had begun preliminary work on the project about two years ago.  Other areas were discussed for possible future grants.  Commissioner Clay Reid made a motion to apply for the grant.  Commissioner Jowan Johnson seconded the motion that carried unanimously.  We will begin looking at other areas that might be applicably for the grant in order to have an ongoing list of possible projects.  We can apply every two years.

Commissioner comments were as follows:

Commissioner Huck Greene welcomed our new members to the board.  He stated it had been an honor to serve as Commissioner for the past six years.

Commissioner Jowan Johnson expressed concern over moving the polling precinct in Rochelle from City Hall to the Ag Center.  He added he understood the reason was due to limited parking at City Hall.

Commissioner Clay Reid stated he was concerned also but if it would save money, he understood.

Commissioner Lanier Keene expressed his concern over the City of Abbeville wanting to close the East side of Highway 129 to parking from Highway 280 to Ocmulgee Street.  He feels this is hurting one business as well as not allowing parking for senior citizens at the Courthouse.  He asked the County Manager be allowed to attend the City Council meeting and represent the Commission concerns.  Commissioner Jowan Johnson made a motion to allow the County Manager to represent the Commission.  Commissioner Alfonza Hall seconded the motion that carried unanimously.

Commissioner Lanier Keene presented a problem in the Industrial Park at McClesky Mills.  A local contractor had cut the highway to run water across the road to the new site.  The work was done in October and he has not repaired the road yet.  Now that we have received so much rain, cars are having difficulty crossing the area.   The Road Superintendent is going to barricade the road if not repaired quickly.  The County has a policy in place that should have been followed.  The Commissioners requested the County Manager have the County Attorney write them a letter giving 30 days to correct the situation.

The County Manager asked the Commissioners to begin a series of workshop meetings to discuss the construction of a new jail.  She stated this is the biggest issue in our upcoming splost referendum and we need to have plenty of time for study in order to not delay our 2018 splost referendum.

Chairman Lanier Keene asked if we could change the regular monthly meeting time back to 6:30.  Commissioner Huck Greene made a motion to change the time.  Commissioner Alfonza Hall seconded the motion that carried unanimously.

There being no further business, Commissioner Huck Greene made a motion to adjourn.  Commissioner Alfonza Hall seconded the motion that carried unanimously. 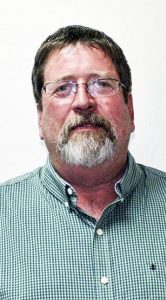