Madison Terry was recently recognized for winning the Patriot’s Pen essay contest. Patriot’s Pen is a nationwide VFW sponsored youth essay competition that provides students an opportunity to write essays expressing their views on an annual patriotic theme. The 2016 theme was “The America I Believe In”.

Mike Childers with Post 4742 of the Veterans of Foreign Wars in Cordele announced the winner during a school-wide assembly at Wilcox Middle School on December 15, 2016. Students in a three county area (Crisp, Wilcox, and Turner) competed and Madison Terry, an 8th grade student at Wilcox Middle School was selected as the local contest winner. Madison’s essay went on to regional competition and placed 2nd among competitors from 13 counties in the 8th VFW district.

Wilcox Middle/High School Principal Chad Davis decided to convene a school-wide assembly so Madison could be recognized in front of over 250 middle school students. Madison read her essay aloud to the group and received thunderous applause from her classmates. 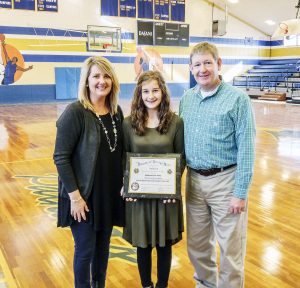