Yet another fire in recent days has erupted to cause destruction.  This time its target was the Reid Hotel in Rochelle, Georgia.

According to Wilcox County Sheriff Robert Rodgers, at approximately 12:00 Midnight,  Friday, January 13, E-911 received a call in reference to heavy smoke coming from the old Reid Hotel in Rochelle.  Sheriff Rodgers also reported that the cause of the fire is undetermined at this time and is under investigation and that there were no injuries.  He also sends out thanks to all of the firefighters and volunteers who came out to try to save the building. “It’s a part of Rochelle’s history,” said Rodgers.  “It was built in the early 1900’s.” 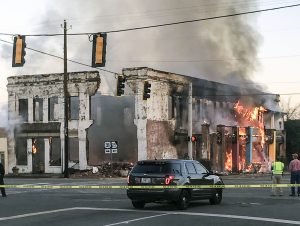