On Sunday afternoon, Crisp County and several surrounding counties suffered from a terrible storm. The very high winds and rain in Crisp County caused localized flooding and severe damage to many homes and businesses.

Emergency crews were already prepared to leap into action after the passing of the storm, and their preparedness was evident right from the start. Crisp County Emergency Management Director Sheriff Billy Hancock and his staff were hunkered down in the command center along with members of the Cordele P.D. and Crisp County Fire and rescue organizing response to the devastation.

Crisp County Power Crews were already on sight to be begin the long, arduous task of getting power back on in the county.

Deputies, Police Officers, and Georgia State Patrol units were on the ground directing traffic and aiding in search and rescue efforts.

From this writer’s perspective, the response to a storm of this magnitude was outstanding from the local government officials to the residents themselves.

A precautionary curfew was put in place from 8:00 p.m. till morning on Sunday and Monday in areas hit hard as to allow emergency crews to work unimpeded in restoring power.

“I am extremely proud of the job all of our emergency crews did and especially how well the Power Commission responded to the task at hand,” said Sheriff Hancock. “All of the training we do to prepare for these events really paid off,” the Sheriff further relayed. Some of Crisp Counties businesses like Frasier’s Auto repair (formerly Bowen Chevrolet) and K and M auto parts on the corner of 24th Avenue and 7th Street lost their roofs.  A and D tires and several stores in the South 41 area lost roofs and suffered severe damage. In Shady Lane Trailer Park, off south Hwy 41, countless trees were blown down on homes and autos. Cordele was spared any known serious injuries or deaths. 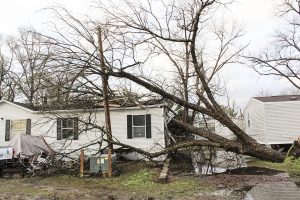 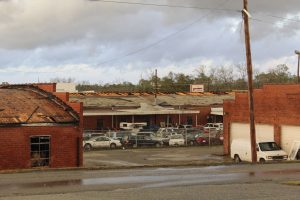 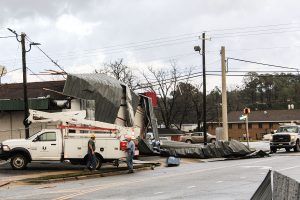 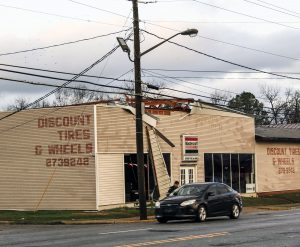